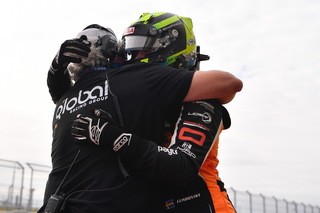 Based on Provisional Results: https://bit.ly/3kyqVBi

Linus Lundqvist carried his winning momentum into the Formula Regional Americas Championship Powered by Honda  finale, claiming his 13th win of the season at Circuit of The Americas on Saturday afternoon in Race 1.

"I am always concerned when I have Victor behind me," Lundqvist said. "I knew after qualifying that the race was going to be tough. He kept me honest the first half of the race and toward the end we built a bit of a gap which was nice. We were glad to extend our lead with another win. CoTA is a new circuit to me so having a great car going into qualifying and the race was important, Global Racing Group has done a great job all season for me." 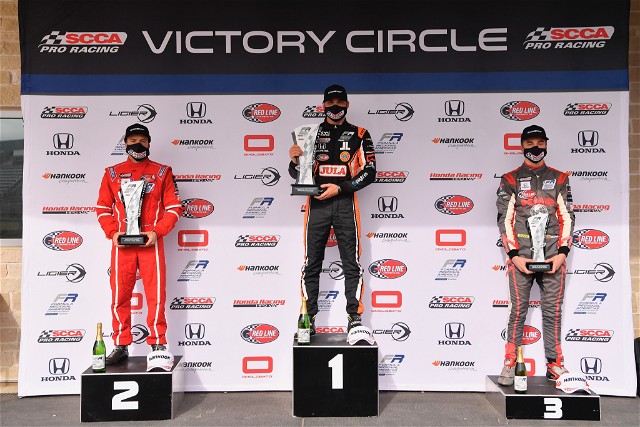 Global Racing Group rookie Lundqvist started from pole position and rocketed from the F1-style standing start, making the 133-feet climb into Turn 1 with Franzoni on his gearbox. Their charged slowed almost immediately as the a full course caution emerged before the drivers crossed the stripe for the first lap. Logan Cusson shunted off course after losing a wheel in the Esses, ending his day early.

On the restart, Lundqvist and Franzoni pulled a gap from the rest of the field. Chasing down Lundqvist, Franzoni set a new in-race lap record with a time of 2:03.885-seconds, only to be topped by Lundqvist two circuits latter with a fast lap of 2:04.698-seconds.

Franzoni's No. 28 machine started to fade in the final few circuits, allowing Lundqvist a 4.245-second margin of victory.

"At the beginning we were very fast, but at the end we started to lose a bit of speed," explained Franzoni. "Now we know where we need to improve and I expect that we will be right there tomorrow."

After the restart, Malukas rounded the 20-turn, 3.4-mile circuit nearly uncontested to earn his 11th podium finish of the season.

"All week it seemed like we were a little down on pace," Malukas said. "We are going to get back to the trailer and work on it, but I think in Race 2 and 3 we will be right there."

Jacob Abel started fourth but dropped back to sixth on the opening lap. With an overtake on Joshua Car (Crosslink Competition) in Lap 5, Abel hunted down Nicky Hays (GRG) to reclaim fourth by Lap 8. 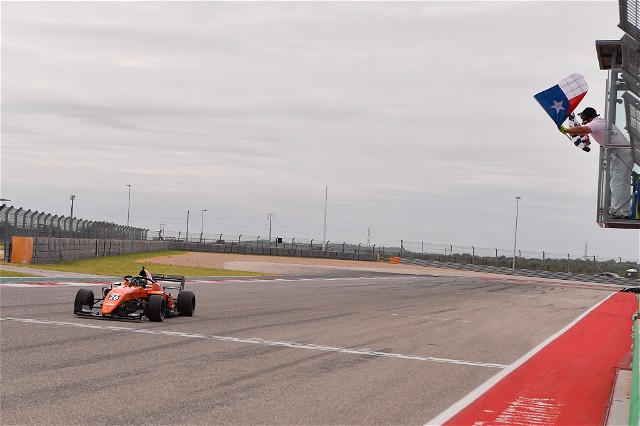 The season culminates on Sunday with Race 2 going green at 10:50 a.m. Central and season finale at 2:35 p.m. Central. Live streaming is available on FanRacing.Live.