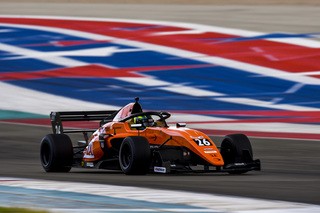 Though he's already secured the title entering the weekend, Linus Lundqvist did not hold back in the Formula Regional Americas Championship Powered by Honda qualifying on Saturday morning. With a fast time of 2:03.787-seconds, Lundqvist secured pole-position, edging out Vice Champion contender Victor Franzoni by .098-seconds to complete a perfect qualifying record for the season. In six qualifying rounds, Lundqvist has earned six pole-position starts, a feat that no other FR Americas driver has accomplished in its history.

"It was a good way to wrap of the season getting pole position at every track this year," said Lundqvist. "Obviously we have more races that we are trying to go for the wins but it was very close with Victor and David so I'm expecting a tough fight from them in Race 1."

Global Racing Group and Lundqvist started the 35-minute session with a  strategy to run six laps and pit regardless of where the Swedish driver ended in the results.

The first five laps of qualifying, Franzoni topped the time sheets, turning his best time on Lap 4 with a 2:03.885-second flyer. Trailing at that time in second, Lundqvist drove flatout around the 20-turn, 3.4-mile circuit, and on his final lap edged out Franzoni by a mere .098-seconds.

Sticking to their original plan, Lundqvist pulled into the pits, while Franzoni tried to squeeze back into podium position. His efforts went unrewarded and with four minutes remaining in the session, Franoni also pulled into his pit box, settling for a second-place start.

David Malukas, who is contesting Franzoni for the Vice Championship, will start from Row 2 in third (2:04.111-seconds) shared by Jacob Abel in fourth (2:04.140-seconds).