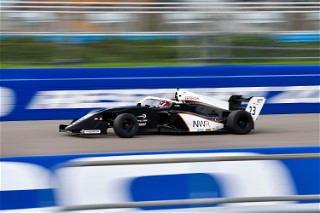 HOMSTEAD, FL (October 4, 2020) – With only a couple days off after the series event at Sebring, Newman Wachs Racing and its driving duo of American Jordan Missig and Brazilian Victor Franzoni traveled to the Homestead Miami Speedway road course for rounds 12, 13 and 14 of the Formula Regional Americas Championship Powered by Honda. The October 2-4 weekend was hot, humid, and wet, which provided some tough conditions for the drivers. However, with a little strategy, Franzoni added two more podium finishes to his strong season-long resume. Missig struggled a little with the challenging conditions, and he was not able to log the results he was aiming for.

“Overall, I’m not too happy about how our weekend went,” offered Brian Halahan, NWR Team Manager. “We started off very strong with the track conditions changing with the weather, however, I did not provide a very good car for long runs and that hurt both drivers. So, I’m putting a lot of the blame on myself for the results. We still managed to get two podiums with Victor, but we were not close enough to challenge with the two front cars. Jordan struggled a bit coming to terms with the track and the set-up. All we can do now is put this race behind us and move onto the final race in two weeks.”

The Formula Regional Americas Championship series took to the track at Homestead on Friday for two practice sessions in preparation for Saturday’s single qualifying session and opening race of the weekend. Throughout the day, there was a chance of rain, but that did not happen nor did it affect the series’ practice sessions. Both NWR cars ran strong while the team worked to fine-tune the set-up, however, the amount of tire degradation at the track proved to take its toll on the tires, slowing the team’s lap times, while not proving our actual speed in the final session. 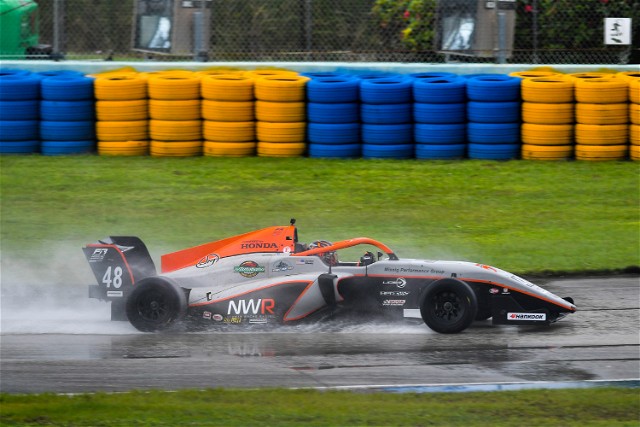 Saturday began with heavy rain, which in turn led to cancelling the one and only qualifying session. Race 1’s starting positions were determined by championship points. Franzoni started in the third position and Missig would start in the seventh position. In the race, Franzoni launched into second, but an off-track excursion led to an overall finish of third-place. Missig also had a great start, but also had an off-track moment which led to him going a lap down. Jordan finished with an 11th place result.

Sunday started with Race 2 at 11:00am under a humid sun and, right away, Franzoni began to attack the top three drivers. However, under the tough conditions and limited tires, he was unable to keep up with the front of the field due to the severe tire degradation. This gave the team the option to make a strategy move late in the race, bringing him in for a new set of tires to allow him to grab a fast lap for the Race 3 starting grid. He ultimately finished 11th in the race, but grabbed the second-place starting spot for Race 3. Missig continued to battle his car and the track, and was able to work himself forward to the eighth-place finish. Race 3, like Race 2, featured Victor battling for the lead at the start, but after a hard-fought fight, he had to settle again for the third-place trophy. It was Franzoni’s eighth podium finish of the season. Just like Race 2, Jordan struggled with his car and the changing weather, and he finished 10th.

The team will now head to Texas in two weeks for Rounds 15 and 16 on the Circuit of the Americas road course in Austin. This will be the final event of the season and the team is working hard to grab that elusive race win.

Driver Quote: “The weekend was pretty good. We had good speed and we were able to get two podiums. Just not enough for a win. I’m excited to go for the last round at COTA.”

Driver Quote: “Homestead was not one of our best weekends of the year. We started out strong in both practices and during testing, but struggled with conditions in the first race and our struggles continued in both race 2 and 3. I am trying to stay optimistic going into COTA so I can end my rookie year out on a high note.”