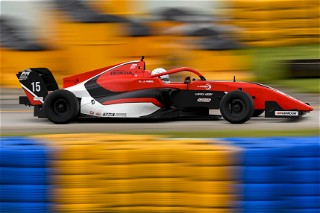 One of the measures of a top-level racing team is its ability to battle back from challenges to post strong results.   Abel Motorsports of Louisville, and their young veteran driver Jacob Abel, again demonstrated that singular ability at last weekend’s tripleheader Formula Regional Americas event at Homestead Miami Speedway.

Nineteen-year-old Abel was planning on being at the sharp end of the field during the three weekend races.  He and his team had performed well the previous week at legendary Sebring International Raceway in central Florida, earning their first podium of the season.   But Homestead was a struggle.   “Thursday was a test day, and we were really behind.  The car was kind of numb to changes.  We went to work, tore everything apart, and discovered a small tub crack that we think was getting bigger and bigger.   We decided to roll out our second car and swap everything over. Because of the change we never got to run on new tires.  Saturday qualifying would have been our first run on stickers, but (qualifying) got rained out.   We missed the setup and unfortunately we lacked pace.”

Still, the college sophomore fought hard, ending up seventh in Race 1 Saturday, before rallying to fifth in Race 2 Sunday after starting ninth.   Sunday’s nightcap, the weekend’s third race, found the Abel Motorsports #15 car finish eighth.  The trio of top-8 finishes propelled Jacob Abel unofficially into a tie for fifth in the 2020 Formula Regional Americas Championship, heading into the season finale at Circuit of the Americas in Austin, TX later this month.

“Now we’ll look forward and get ready for COTA,”said Jacob.  “We managed the most points and best results we could out of the weekend.”

Team Principal Bill Abel added, “The weather and the high level of competition in the FR Americas paddock were big challenges for us this weekend.  We had a few moments of brilliance, along with lots of opportunities for learning and growth.   We’ve positioned ourselves to make a strong run into the top five in the Championship and we plan to finish strong at COTA.  It’s been a year of growth for us and we’re excited about our future as a race team.”

Abel Motorsports has had great results previously at COTA.  In the Series’ previous appearance there in 2018, the team scored both wins, plus fourth and sixth place finishes.  They are looking for an equally strong weekend to close out the 2020 FR Americas year in two weeks in the Texas capital city.