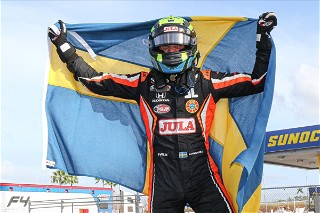 Linus Lundqvist has been crowned 2020 Formula Regional Americas champion, winning the title early in the penultimate round of the season.

Lundqvist secured the title on a gold-clad weekend of racing at Homestead Miami Speedway, winning twice to put the championship out of reach for his rivals.

“Absolutely incredible,” says an elated Linus Lundqvist. “This means so much for me and my career. It’s been, and continues to be, a season that I will never forget. I want to thank my team, Global Racing Group, and everybody who believes in me and helps me go forward.

"Also a massive thanks, of course, to Honda for setting up this incredible scholarship. I still can’t believe what we just won. Definitely one of the happiest days of my life!”

For Lundqvist, the Formula Regional Americas triumph marks a third single-seater title in just five years. He previously won the Formula STCC Nordic title in his native Sweden back in 2016, and sealed the prestigious BRDC British Formula 3 crown in 2018.

He ultimately sealed the deal in the final race of the weekend, which he finished in a controlled second place.

“It’s been another near-perfect weekend,” Lundqvist concludes. “Two wins, three poles, three fastest laps… It was only really a win in the final race that got away. I made a poor start, dropped down to third, and then I tried to make it back into the lead but also didn’t want to make something stupid. At the end of the day, second was perfectly OK on this occasion; winning the title was my main priority. This calls for some celebrations tonight!”

Linus Lundqvist has won 12 out of 14 races staged this season, amassing an unassailable 91-point lead ahead of the Formula Regional Americas finale in Texas on October