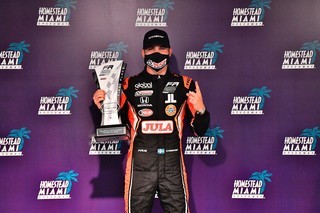 Linus Lundqvist nearly sealed the Formula Regional Americas Championship Powered by Honda title at Homestead-Miami Speedway. In the all green race, Lundqvist claimed the checkered nearly 15-seconds ahead of second-place finisher David Malukas on Sunday morning in Race 2. With his 12th win of the season, the Swedish rookie was only two points shy of clinching the title early.

"The team gave me a great car, and I went out and just did my job," said Lundqvist. "We are close to the championship title but our focus is still on winning each race."

Malukas started and finished the race in second, securing his 11th podium visit of the season. His HMD Motorsports teammate Logan Cusson secured a Row 2 start, and defended the position all the way to the checkered for his first career FR Americas podium.

"It's an amazing feeling to be up here," said Cusson. "I want to thank HMD Motorsports for working with me to get better results and for my parents for sticking with me for the last few seasons of mediocre results, we've finally turned a corner.."

Victor Franzoni had a tough race and pitted early. He was the only driver to go out on scrub tires. He switched to stickers and focused on setting a flyer that gave him a second place start for the Homestead finale.

The FR Americas drivers will take the green at 4:00pm Eastern for the last race of the weekend. Stream the event live at FanRacing.Live.