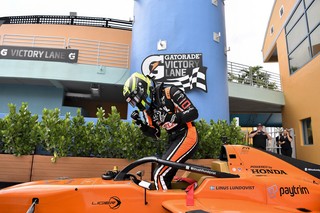 Due to inclement weather, the Formula Regional Americas Championship Powered by Honda qualifying set for Saturday morning at Homestead-Miami Speedway was canceled. The grid for Race 1 was based off championship points, which promoted Linus Lundqvist pole position.

With the heavy rains that moved in earlier in the day, the track conditions were damp and inconsistent in areas. The teams were given the option which Hankook Tires to run, and all chose to switch to slicks while waiting on pregrid.

Lundqvist dominated from lights out to the waive of the checkered flag, claiming his 11th win of the season nearly 12-seconds ahead of second-place finisher David Malukas.

"The team made a last minute change to dry tires, even though it was wet conditions, but it worked out as the track dried," said Lundqvist. "The track was tricky and today was all about just staying on the track."

Starting from third, HMD Motorsports rookie Malukas hunted down second-place starter Victor Franzoni to take the position just past the half-way mark in a side-by-side battle that left Franzoni playing catch-up for the rest of the session.

Franzoni had to settle for a third-place finish, his third of the season and the Newman Wachs Racing pilot's sixth podium visit of the season.

The FR Americas drivers finish up their Florida swing on Sunday with a pair of 35-minute races.

Lundqvist will start on pole for the opening round on Sunday starting at 11:00am Eastern. The finale will be held at 4:00pm Eastern.