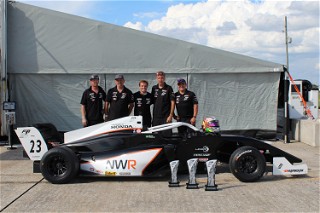 SEBRING, FL (September 27, 2020) –  After an almost two-month hiatus for ‘Summer Break’, Newman Wachs Racing and its driving duo of American Jordan Missig and Brazilian Victor Franzoni traveled to the historic Sebring International Raceway for rounds nine, ten and eleven of the Formula Regional Americas Championship Powered by Honda on September 25-27. The weekend proved to be a strong outing for Franzoni as he captured three podiums in the three races with two runner-up finishes and a third. Missig’s weekend did not turn out how he would have liked due to incident out of his control in Race 2, which caused his weekend to end early. However, this is just provided more motivation for his race next weekend.

“Overall, for the team it was a great weekend,” offered Brian Halahan, NWR Team Manager. “Victor did a great job putting his car on the podium all three races and we made huge strides on improving the cars. It is unfortunate the weekend Jordan had, some out of his control, but I know he will bounce back this weekend. I’m looking forward to Homestead and seeing if we can get some more podiums.”

The Formula Regional Americas Championship series took to the track at Sebring on Friday morning and afternoon for two practice sessions, in preparation for Saturday’s single qualifying session and opening race of the weekend. After a tremendous amount of rain overnight, Saturday’s action started off delayed by a half hour. Once the time ran out on the qualifying session, Franzoni had put his car in the fifth position, while Missig timed in eighth for Race 1. The opening event of the tripleheader took place in the late afternoon, in an extremely hot and humid part of the day. After the green flag flew, both drivers began to fight for positions. Franzoni battled within the top-five throughout the race and, after a late full-course caution, he was able to get a great restart to grab the third position, giving him his third podium of the season. After falling back a few positions at the start, Missig was pushing hard to grab spots, but he ultimately lost control of his car and the resultant damage ended his race early.

Like Saturday, Sunday began with delays due to more overnight rain. Race 2 got underway in the late morning and right away Victor got to work battling in the top-three, fighting to grab the lead. While dicing it up with second place, the leader spun and Victor immediately found himself fighting for the lead. Franzoni pushed hard all race and settled for a second-place finish. Jordan had an incredible start. gaining one position and then, on lap two, another. However, Jordan was collected in an incident involving two other cars, which was out of his control, putting him out of the race once again. The damage was too severe for the team to get him back on the track for Race 3, ending his weekend.

In Race 3, Victor was on a mission and after falling back to third for a handful of laps, he fought back to grab second place. He was clicking off fast laps catching the leader but unfortunately ran out of time and took his second runner-up finish of the event. However, he did score the fastest lap of the race, giving him an extra crucial point in the championship hunt.

The team will now head south this week for Rounds 12, 13 and 14 on the Homestead Miami Speedway road course. After grabbing three podium finishes in three races, the team is extremely motivated to keep this momentum going in Miami to snag as many championship points as possible.

Driver Quote: “Sebring was awesome. We got three podiums and ended up with the fastest lap time of Race 3. The improvement we had during the whole weekend was amazing. And this gave us a great direction in how we are going start at Homestead. I feel bad for my teammate that had an unlucky weekend, but this weekend we have one more tripleheader so we’re ready and excited for it! I would like to thank Newman Wachs Racing for all their hard work.”

Driver Quote: “This definitely was a weekend to forget, to say the least. I struggled getting grip with the bumps that Sebring offers in the practice sessions, then followed up with a decent qualifying. But in the races, nothing went my way. I struggled to find grip in Race 1 and unfortunately, I lost the handle of the car and in Race 2 there was nothing I could have done differently. Weekends like this may sting, but they also motivate you to do better in the next race, which is what I am looking forward towards.”