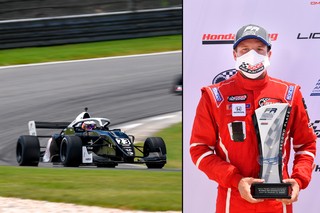 LEEDS, AL (August 2, 2020) – Newman Wachs Racing and its driving duo of Brazilian Victor Franzoni and American Jordan Missig traveled to the beautiful and iconic Barber Motorsports Park for rounds six, seven and eight of the Formula Regional Americas Championship Powered by Honda on July 31-August 2. Franzoni led the NWR squad to their third podium of the 2020 season, grabbing the runner-up position in Race 1, while Missig ran consistently all weekend, gaining much needed championship points.

“First off, I’d like to say I’m very proud of the team and both of the drivers,” offered Brian Halahan, NWR Team Manager. “We had our team’s best finish of the year but, unfortunately, with the decisions the tech department made over the course of the weekend that I do not agree with, I feel we should’ve all been advanced one position higher. With that said, we will move forward with our testing program until we’re back at the track for Rounds 9, 10, and 11 in late September.”

The Formula Regional Americas Championship series took to the track at Barber on the Friday morning for two practice sessions. Storms rolled in at the end of the day, and continued through the night, making the track quite ‘green’ for Saturday. The day consisted of their one and only qualifying session, setting the field for their mid-day Race 1. Franzoni, 24, topped the charts for the majority of the qualifying session before settling into the second position. Missig ran consistent laps times as well, which slotted him into the sixth position. Race 1 took place just past noon in very warm temps. Victor had a monster start and grabbed the lead going into Turn 1 and continued to pace the field for the first half the race before being overtaken by the championship leader. He then settled into his rhythm for a second-place finish. Missig, 21, fought all race long for a top-five finish against some more-experienced drivers. He eventually finished where he started in the sixth position, his fourth top-10 of the young season.

Sunday also started bright and early as FR Americas was the first group of the day on-track for their second race. The fastest laps times in Race 1 set the grid for Race 2, which meant that Franzoni started in the third position and continued his fight for a top-five finish, eventually taking home a fourth-place result. Missig had a tremendous start, but a lap one incident he was unable to avoid caused damage to his rear wing, forcing him to pit lane to replace the damaged component. The team did an incredible job in making the switch quickly and not letting Jordan go a lap down. However, this incident dropped him close to the tail of the field and he didn’t give up, persevering to work his way back up to the 11th place.

Just as was the case for Race 2, each drivers’ fastest laps set the line-up for Race 3. Franzoni grabbed the fourth starting spot and never gave up going for another podium. By the end, he ran out of time while stalking the third-place driver, giving him a fourth-place finish. Missig showed his pace early on by continuing to battle with fourth, fifth and sixth place drivers the entirety of the race. He only gained one position on the charts, but it was of his best races to showcase his growing open-wheel talent. Both drivers performed well, impressing the team and getting crucial championship points for not only themselves but for NWR in the team championship, as well. 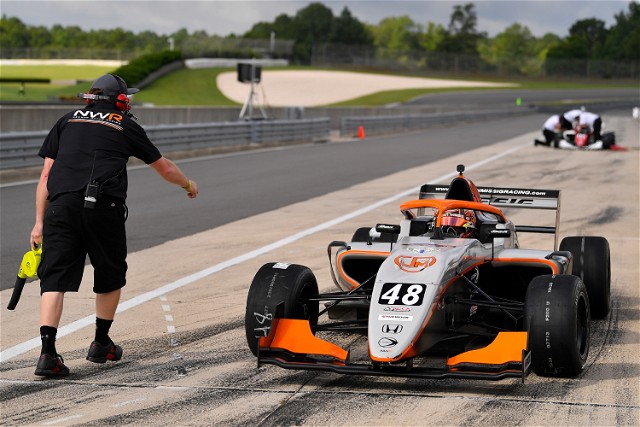 The team will now have a little under two months off before heading to Sebring, Florida on September 25-27 for Rounds 9, 10 and 11. They will use this downtime to log dedicated testing in preparation for the stretch run of the 2020 season.

Driver Quote: “The weekend in Barber was really good. We had great and consistent results and another podium. I feel that we are getting better and improving every weekend and I can’t wait for us to get a win. I’m sure with all the improvements we’re doing, we will get one soon.”

Driver Quote “Barber turned out to be a solid weekend for us. Both Victor and I saw that we had speed early in the weekend and continued to consistently build on that throughout the rest of the event. Unfortunately, I did get a little wing damage in Race 2, but the guys did a great job with the wing change to try to get me back out as soon as possible to try and salvage some points. But now, it’s time to put Barber behind us and look forward to one of my favorite tracks on the calendar, Sebring.”