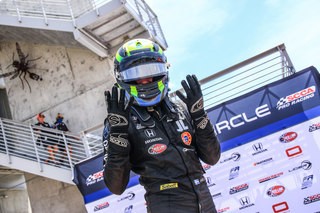 Linus Lundqvist continued to blitz the opposition with another emphatic lock-out of Formula Regional Americas victories in the third round of the season at Barber Motorsports Park, taking his tally of consecutive wins up to eight.

Lundqvist won all three races of the weekend from pole position, controlling proceedings at the Alabama venue while setting a trio of fastest laps to further underpin his stranglehold on the 2020 campaign.

The Swedish series debutant, contesting his first season of American single-seater racing, also set yet another FR Americas lap record to go with the ones he previously established in the preceding rounds at Mid-Ohio and Virginia International Raceway.

Lundqvist's performance at Barber Motorsports Park means he extends his all-conquering streak of victories in the Honda-powered one-make championship, having won all eight of the races staged so far. The Global Racing Group driver also remains unbeaten to pole position this year.

"It is just truly unbelievable how good this season is turning out to be," says Linus Lundqvist. "I could never have dreamed of this when I arrived in the U.S. earlier in the summer. Eight straight victories... I am a bit lost for words to be honest. This has probably been the best weekend so far. I was able to drive with some bigger margins, and the track here at Barber is amazing; one of the most fun I've ever driven. All I can do is thank my team for all their faultless work, Honda for the reliable engine, and everyone for their kind words. I can tell you one thing: winning never gets boring!"

With the first three rounds of the season now completed, and a lengthy two-month break coming up before the field regroups in Florida in late September, Linus Lundqvist now leads the FR Americas standings by 76 points from second-placed David Malukas (USA).