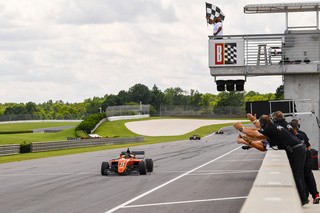 HMD Motorsports driver Malukas put pressure on Lundqvist early in the 35-minute session. But one small mistake by Malukas allowed Lundqvist to pull a gap, and in an all green race, Malukas never got the change to rechallenge Lundqvist.

Hays started and finished third, but it wasn't an easy race for the Global Racing Group rookie as a very experienced Barber driver Victor Franzoni  stuck to Hays' gearbox for a majority of the session. Hays was finally able to shake the Newman Wachs Racing driver to finish third, his second podium finish of the weekend. Franzoni took the checkered fourth.

For a majority of the race, Danial Frost was in a heated battle behind Jacob Abel (Abel Motorsports) for fifth. Abel shutdown the prowling Andretti Autosport rookie several times until a mechanical issue sent Abel packing to the pits. Frost inherited the position for a fifth-place finish.