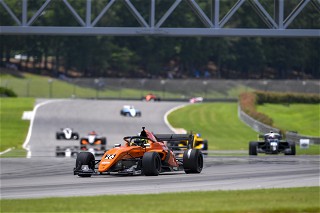 Launching off the stripe in the F1-style standing start, Lundqvist build an immediate gap from second and third place starters, David Malukas and Victor Franzoni. With plenty of clean air, the Global Racing Group rookie reset the track record he set the day before, clocking a blistering lap time of 1:18.916-seconds on his way to finishing nearly five-seconds ahead of his GRG teammate Nicky Hays.

Hays had a breakout race. Making gains every round, the French F4 graduate worked his way to a podium finish, his first visit of the season in second. Hays started the race in fourth and got the jump on Franzoni (Newman Wachs Racing) on the start. Putting pressure on Malukas, Hays made his move exiting Turn 15. Using Malukas' slipstream, Hays whipped his orange No. 51 machine to the outside, going side-by-side on Lap 2. Out braking Malukas, Hays got by the HMD Motorsports driver on Turn 16 entrance, and never looked back.

Malukas tried to repay the favor but was unsuccessful, settling for a third-place finish, his second podium finish of the weekend.

The FR Americas drivers have wrap up their triple-header weekend at noon Central today. Watch live at https://fanracing.live/