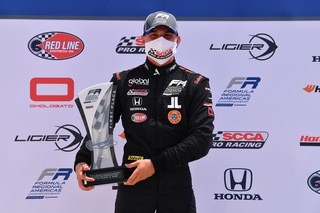 "Looking at the pace we had today, and the car felt great," Lundqvist said. "The secret to winning is hard work, not just for me but for the team too, that way we arrive at every track with a good package."

Newman Wachs Racing driver Victor Franzoni got the jump off the start on the pole-starting Lundqvist to lead the first four circuits of the all green race. Lundqvist continued to pressure Franzoni around the 17-turn Alabama track, until the Global Racing Group rookie saw his opening. Making a daring move dropping to the inside of Franzoni entering into Turn 1, Lundqvist passed for the point, and never looked back. Lundqvist built nearly a two second lead in three laps, finishing the race 5.119-seconds ahead of second-place finisher Franzoni. This was Franzoni's first podium finish since the opening round at Mid-Ohio.

HMD Motorsports rookie David Malukas started fourth and advanced a position on the first lap after Joshua Car dropped wheels off in the corkscrew. Malukas challenged Franzoni for second, but the 35-minute clock expired before he he could make a move.

The weekend culminates Sunday with two additional 35-minute races (8:00 a.m. and noon). The tripleheader FR Americas event will be open to fans. Tickets are only available at the gate, $20 per day or $35 for the weekend, the event is cashless, only debit and credit cards will be accepted.