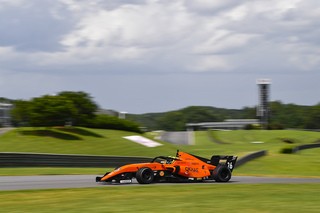 Topping the times after six laps, Lundqvist continued to reset the fastest time, padding a gap between he and the other drivers. On his final circuit, the Global Racing Group rookie set a 1:19.280-seconds flyer.

Victor Franzoni held the top time in the early stages of qualifying before getting bested by Lundqvist. Franzoni, who has a vast competition history at Barber, pitted for a fresh set of Hankook slicks with just under 15-minutes left in the session. After a few laps on new tires, Franzoni started to reel in Lundqvist, getting within .079-seconds of the championship leader. However, Lundqvist picked up the tempo as Franzoni closed in, finishing with a time .384-seconds ahead of the Newman Wachs Racing pilot.

With under five minutes remaining in the 30-minute qualifying, Joshua Car also made a quick pit stop for fresh tires. That decision by his Crosslink Competition squad made all the difference for Car as he quickly shot into 1:19s after being mid-pack. Car will start on point of Row 2 with HMD Motorsports rookie David Malukas beside him.

Race 1 starts today at 12:55 p.m. The weekend culminates Sunday with two additional 35-minute races (8:00 a.m. and noon). The tripleheader FR Americas event will be open to fans. Tickets are only available at the gate, $20 per day or $35 for the weekend, the event is cashless, only debit and credit cards will be accepted.