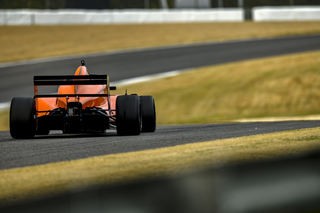 "I was very happy with the two practice sessions," Lundqvist said. "Barber is the funnest track I've driven, it has such a nice rhythm and flow. We were lucky to end the day in a nice place. As we saw, conditions can change within a minute, so we just have to be prepared for everything with the set-up for qualifying tomorrow."

While Lundqvist finished each practice with the fastest laps, he didn't  start out that way. In Practice 1, HMD Motorsports rookie David Malukas held the top spot for a majority of the session. With under four minutes left, Lundqvist set a 1:20.944-second flyer, besting Malukas by .274-seconds. Malukas reset his personal best time on Lap 17, but it wasn't fast enough to reclaim the lead. Practice 1 times were the closest of the two with the top-seven times separated by only .781-seconds.

Practice 2 ended prematurely after inclement weather moved through the Alabama hills.Global Racing Group seemed to have its cars dialed in after the earlier session with three of its four drivers taking the top times. Lundqvist set the early pace as the only driver in the session to enter into the 1:20s (1:20.359-seconds). Two of his GRG teammates (James Roe Jr. and Nicky Hays) slotted in behind him in second and third. Roe Jr. clocked his fastest lap (1:21.305-seconds) right before the track turned to red.

Qualifying opens Saturday’s track events at 8:40 a.m. with the first of three races starting at 12:55 p.m. The weekend culminates Sunday with two additional 35-minute races (8:00 a.m. and noon). The tripleheader FR Americas event will be open to fans. Tickets are only available at the gate, $20 per day or $35 for the weekend, the event is cashless, only debit and credit cards will be accepted.