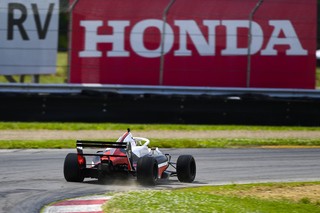 Former Series Champs Return to Scene of Past Successes

Top-tier FR Americas team Abel Motorsports of Louisville, KY is pointing toward the 2020 season’s third weekend as a breakout event in their quest for the Championship.   The two-car squad won the first series title in dominant fashion just two seasons ago and scored two wins and eight total podiums on the way to third in the team Championship last year, while being forced to miss two of the six race weekends due to schedule conflicts.   Now, after a tough fight in the Virginia heat two weeks ago at VIR, Abel Motorsports faces what could be an equally challenging weekend at beautiful Barber Motorsports Park in Leeds, AL.

“Barber is one of our favorite race tracks,” noted team principal Bill Abel.  “We earned a third and a fourth there a year ago.  It’s an important place because it’s a big part of IndyCar, where we plan to compete in a few years.   We’ve learned a lot in the early part of the year, we had a great test at Barber earlier this year, and we’ll be ready to go this weekend.”   Abel Motorsports picked up four top-ten finishes at VIR two weeks ago.

“Our preseason test at Barber was really good, so I’m optimistic.  We had that podium there last season and I really like the track a lot.  It’s similar to Mid Ohio for me.  It’s a tough place to pass, so qualifying will be crucial.  I’m in great shape so I’m ready for another hot weather race weekend.”

Abel’s first-year teammate, 19-year-old Blake Upton of Sammamish, WA, is equally well prepared.  “I do heat training specifically, just for the kind of conditions we had at VIR and will have at Barber.  It’s an awesome track, one of my most favorite places.  Mr. Barber and his staff have built an incredible facility.  I can’t wait to get there!”

FR Americas teams will qualify early Saturday, August 1, and the first race of the tripleheader weekend takes place at 12:55 PM Saturday (all times Central).   Races 7 and 8 of the 2020 season happen Sunday, August 2, at 8AM and 12PM CDT.   Live timing and scoring is available at www.race-monitor.com, and all events will be live streamed at www.fanracing.live.

Abel Motorsports of Louisville, KY, is a top-tier open wheel development team, with driving, marketing and sponsorship opportunities available in a variety of professional series.   For more information, visitwww.abelmotorsports.com.