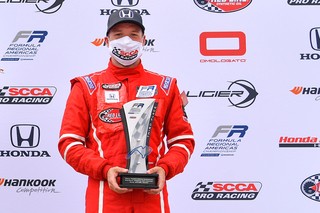 Lexington, OH (June 28, 2020) – Newman Wachs Racing and its driving duo of Brazilian Victor Franzoni and American Jordan Missig traveled to the iconic Mid-Ohio Sports Car Course facility on the June 25-28 weekend for the first and second rounds of the Formula Regional Americas Championship Powered by Honda. Franzoni led the squad, scoring a strong third-place finish in Race 1 of the weekend. Missig also exceeded the team’s expectations in his first official open-wheel race, finishing with an impressive seventh-place result in Race 1.

“Overall, I am incredibly pleased with how our first FRA weekend went,” offered Brian Halahan, NWR Team Manager. “In qualifying and the first race, we had great results from Victor and Jordan, and to be honest, I was more excited with Jordan’s results because it was unexpected. He was much further up in the grid than I expected him to be at this point in the season, especially since this was his first official open-wheel race. He has really stepped up his game and was running with people with way more experience than he has in these types of cars. On Sunday, we made a few mistakes but we all learned a lot. I feel we should come back even stronger at VIR in two weeks.” 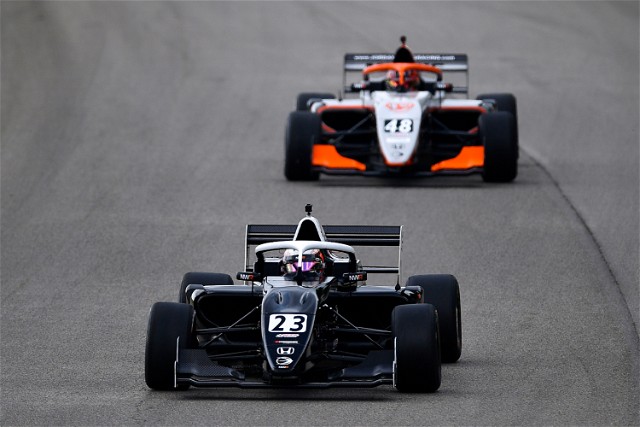 The Formula Regional Americas Championship series took to the track at Mid-Ohio on the Thursday afternoon for their first of two practices. Franzoni and Missig timed in second and 16th on Thursday, however, upon review of Jordan’s engine after Practice 1, the team determined that it was down on power and made an engine swap overnight on Thursday. On Friday, the were third and 12th on the timesheet, setting up for Jordan’s impressive qualifying effort. In the short 20-minute qualifying session for Race 1 on Friday afternoon, Victor stepped up his pace to grab the third position on the grid, while Jordan lowered his lap time to grab the sixth starting spot for Race 1.

The first race took place on Saturday morning, and NWR’s drivers immediately entered into multiple car battles with some of the best drivers on the track. Victor would battle for third, only to lose it for just a handful of laps before regaining his podium finish with two laps to go, giving Newman Wachs Racing a podium position in their first FR Americas race. Jordan had a tougher start, losing a couple of positions, but he was in a constant battle with four cars throughout the race. He diced it up with some of the best drivers with immense open-wheel experience and was able to pick cars off to grab an outstanding seventh-place finish. The team was thoroughly impressed with the job that Jordan accomplished in his first open-wheel race.

For Race 2, starting positions were set by the drivers’ fastest laps of Race 1. Franzoni and Missig filled row four in seventh and eighth, respectively. Unfortunately, Victor spun his tires at the start and went off-track in Turn 2, which dropped him to the tail of the field. However, with the help of a mid-race full-course caution and perseverance, he was able to climb his way back up to finish eighth. Missig had a good start, only losing one position, and began battling in a five-car fight, although near the halfway point, another car spun at the top of Turn 7, coming to a complete stop. Jordan had nowhere to go and nicked his front wing and tire. He was forced to pit lane during the full-course caution to get a new wing and then returned to the race at the tail end. Despite battling handling issues left over from the contact, Jordan proceeded to work his way back up the field to finish 13th.

The team will now use the two weeks off for more testing in preparation for the next race, which will take the team to Virginia International Raceway on July 17-19.

Driver Quote: “The weekend was great! We had a very good start running in the Top-3 during both practices and qualifying. We’re all still learning the car, but to start the season this way was amazing. We got P3 in Race 1 and P8 in Race 2 because I made a mistake. So, I am very excited for the next round and I’m sure we’ll be even stronger. Thank you to the Newman Wachs Racing team for all their hard work.”

Driver Quote: “The race weekend at Mid-Ohio Sports Car Course turned out to be a bit of a roller coaster ride to say the least. We struggled for speed early on during Practice 1. Brian and the rest of the NWR guys put their heads together and went to work on seeking a problem with the car. Turns out it was a power issue within the engine itself, so the team put in the long hours to get the car ready for practice and qualifying the next day. After the change, we were able to put in an outstanding lap putting me sixth on the timing sheets. Race 1 proved to be another high of the weekend with me finishing seventh in my first career FR Americas race. Race 2 threw some adversity that I had to try to overcome with a car spinning at the top of turn 7 and coming to a stop at the crest of hill in the middle of the track. With nowhere to go, it resulted in me getting some wing and tire damage on lap 6, forcing me to pit and make a wing change, and to restart from the back of the field. I did manage to make up a few positions on the restart but could only make it up to the 13th spot. I will say I am very pleased with the way this season has started out, but this is only the beginning. We still have a long season ahead of us to go, but this is where all the fun starts. A huge thank you to my sponsors; Missig Performance Group, Autobahn Country Club and Kart Circuit Autobahn.