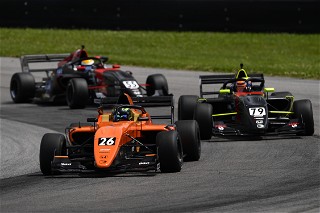 The FR Americas drivers delivered two action packed races at Mid-Ohio, with exciting battles from the front to the back of the 17-car field, but it was  Global Racing Group rookie Linus Lundqvist who controlled the weekend with a dominate debut. 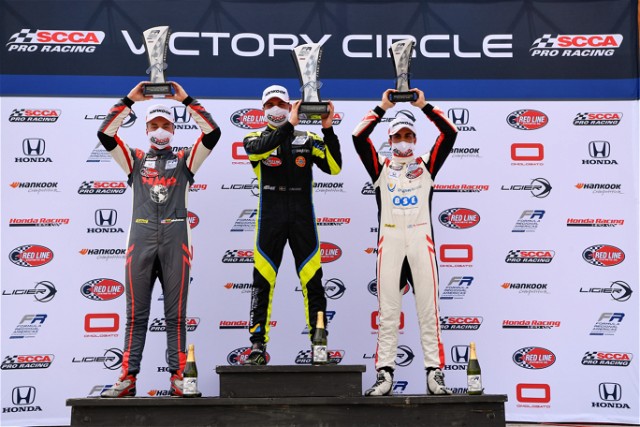 Behind the No. 26 Paytrim machine, the 2018 BRDC British F3 champion swept the weekend, qualifying on pole by setting a new track qualifying lap record (1:19.273-seconds) then driving lights to checkers in both 30-minute features. The outstanding drive earned Lundqvist the Omologato Perfectly Timed Move of the Race.

“Two wins, two pole positions and setting the fastest lap, it’s very hard to beat an opening weekend like that,” Lundqvist said. “Obviously it wasn’t easy, especially when you look at how large and competitive the field is. I’m a very small part in this operation, the team gave me a great car and I went out there and did my part.

While HMD Motorsports driver David Malukas’ race craft shined on the technical 15-turn, 2.4-mile circuit, he played second fiddle to Lundqvist all weekend. Topping the charts early in qualifying, Malukas of Chicago was edged out of pole-position in the final laps by .001-seconds, the closest qualifying margin in series history.

In Race 1, Malukas, staring second, bobbled the F1-style standing start, dropping back to fifth before Turn 1. Malukas worked his way back to third by a final lap and clinched second after an unforced error made by Santiago Urrutia, sent the Uraguan pilot flying off course, forfeiting his podium position to his teammate. Newman Wachs Racing driver Victor Franzoni crossed the stripe in third.

Malukas challenged Lundqvist for the point in Race 2, but his focus quickly changed from challenging for first to defending his second-place position which allowed Lundqvist to pull a gap. Malukas completed his FR Americas debut weekend with a pair of second-place finishes.

Urrutia recovered in Race 2 to claim the podium finish he missed out on earlier in the weekend. 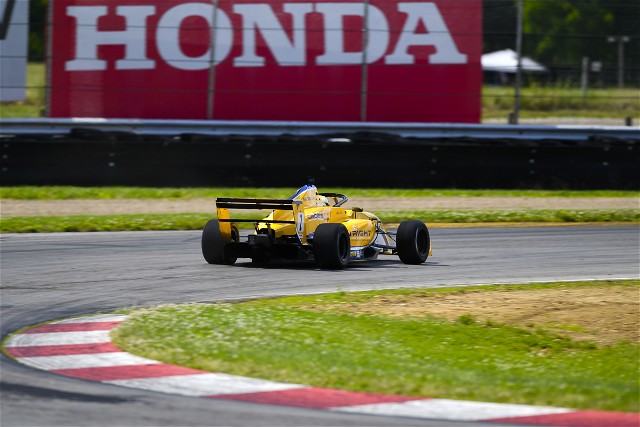 Honda Performance Development (HPD) extended its partnership through 2023 as the sole engine supplier to the FIA F4 U.S. and FR Americas Championships. In combination with the recent announcement that Parella Motorsports Holdings (PMH) is taking ownership of commercial promotion for these series, the future is very bright for developing world class open-wheel racing talent in North America.

The FR Americas Championship and F4 U.S. Championship offer global developing drivers the opportunity to demonstrate their skills on an international platform, with affordability and safety as top priorities. Both series’ cars are powered by equally strong, reliable, HPD-modified versions of the current Honda Civic® Type R® engine, with the FR Americas powered by a turbocharged 303-horsepower edition, while F4 U.S. uses a normally aspirated 160-bhp engine.

“We are eager to continue the strong momentum in developing racing talent in North America by leveraging our unique product and program capabilities,” said Ted Klaus, President of HPD. “I’d like to thank our partners SCCA Pro Racing, Ligier and Hankook for taking the risk with us, starting in 2015, to power the dreams of future INDYCAR stars.

“Our consistent, reliable, and powerful HPD-developed Type R® race engines have helped create affordable racing opportunities for developing open wheel racers, and we see even more opportunities with this new partnership,” Klaus continued. “We’re excited that PMH has taken an active interest in helping aspiring professional racers achieve their goals ‘Powered by Honda’, and we’re excited to see what the future holds for these series and their participants.”

The world’s largest FIA F4 average field stormed through Mid-Ohio Sports Car Course over the weekend, bringing 33 F4 U.S. cars to the Honda-supported circuit. While teams and drivers were ready to go racing, Mother Nature had other plans in mind, plaguing the first round with torrential weather. As rain worsened the already slick track conditions, lightening was spotted, forcing race control to call the round before the green flag reemerged. Since no green laps were taken, points were not awarded. The series will attempt to make up the round at a later date. 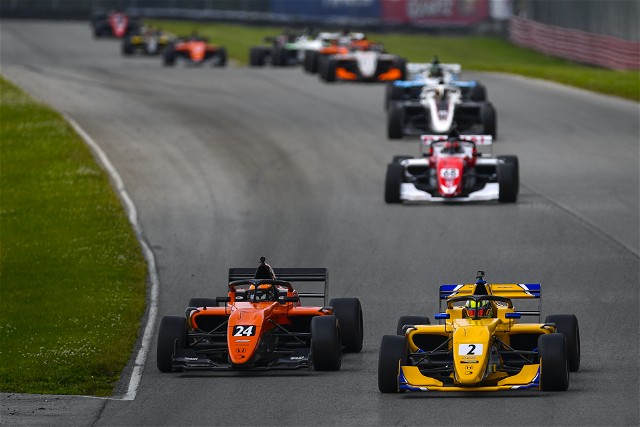 Since no official lap times were clocked in Race 1, the grid for Race 2 was based off qualifying results. Christian Bogle started on point, and after three restarts, Bogle held onto his pole-position start to claim the Race 2 win at Mid-Ohio on Sunday. The race ended in yellow after a debris from an off car littered the track forced race competition to a halt. Crosslink/Kiwi Motorsport driver Dylan Tavella crossed the line second with Velocity Racing Development rookie Hunter Yeany rounding out the provisional podium.

The next rounds of racing will be staged at VIRginia International Raceway for the Andy Scriven Memorial Race Weekend at July 17-19. For race replays and live streaming visit FanRacing.Live. For more information on the championships visit: F4USChampionship.com or FRAmericas.com.