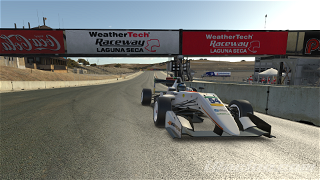 Blake Upton lead the championship entering into the finale with a seven-point advantage over a third-place Dakota Dickerson. But, after Dickerson scored a dominate win, his second of the esports season, on the fan favorite Laguna Seca, the pair finished the night both with 97 points.

“I can’t thank FR Americas enough for putting this championship together to give fans something to watch while they were stuck at home,” said Dickerson. “It’s also been fun to represent my sponsors Stress Engineering and Rox Bolden on the iRacing format. It’s great to see the real-life sponsors of the series getting involved in the iRacing championship. Without their support none of this is possible and I look forward to receiving a set of Hankooks for my car.”

Upton lead the championship race for half of the season and maintained his perfect record of scoring points in all rounds after a fifth-place finish in the finale. But, Dickerson overshadowed Upton’s title campaign on Tuesday by being the first driver in the series to win two races. The FR Americas sophomore didn’t leave empty handed, earning a three-month virtual trainer from PitFit Training for finishing as the Vice Champion.

“The championship was really fun,” said Upton. “It was nice to be able to compete against drivers that I might go up against in the regular season. Congratulations to my friend Dakota Dickerson on a great season of competition. I am looking forward to the regular season.”

Benjamin Pedersen’s win in the last round at Sebring International Raceway catapulted the Global Racing Group driver to fourth in the season-long points race. A podium finish at Laguna Seca was just enough to edge out GRG FR Americas rookie Dario Cangialosi for third in the open wheel esports championship, winning a watch from Omologato.

Cangialosi ended his first iRacing season in fourth with F4 U.S. rookie Viktor Andersson rounding out the top five in the championship.

“Big congratulations to Dakota Dickerson on winning the championship, it was nice to see a Global Racing Group driver on top,” said Pedersen. “Really good results for GRG with three of its drivers in the top four spots. The race today was clean and pretty straight forward. Dakota was fast and made no mistakes, which made it difficult to close the gap on the lead, but I had a lot of fun racing in the championship.”

In the season finale, lap times were the closest yet in the seven rounds, with the top 12 drivers separated by a mere half a second. Dickerson claimed pole position by .070-seconds over Simon Sikes and went on to lead every circuit of the 24-lap race. Sikes finished second with Pedersen in third.

Starting in last place, Jordan Missig advanced 10 spots to cross the line 10th. Finishing with 67 total overtakes throughout the season, Missig was named the Sabelt Hard Charger, winning a prize pack from Sabelt America complete with a Sabelt product certificate and merchandise.

“The FR Americas iRacing Invitational Championship was an awesome experience to be a part of,” said Missng. “It was an interesting way to get introduced to the series and to see the camaraderie between each of the drivers. I was fortunate enough to win the Sabelt Hard Charger Award, ending the season with nearly 70 passes. I would like to thank Newman Wachs Racing for the opportunity to race in the sim series, but now it’s time to do it for real.”

Points were determined following the FIA FR system. The championship was calculated based on drivers top six results (allowing one race to be dropped). Guest drivers were not eligible to earn championship points.

Fans can binge watch the entire season from start to finish by visiting the series YouTube page: https://bit.ly/3c9oj8I.