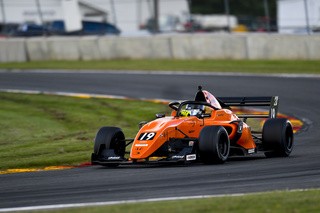 Over the past two weeks, hundreds of Formula Regional Americas Championship Powered by Honda fans from around the world rallied together on social media to pick the final location of the inaugural FR Americas iRacing Invitational Championship. From two coasts to two countries and eight circuits compiled of street, road and oval courses, fans voted that the drivers will take on WeatherTech Raceway Laguna Seca for the esports finale Tuesday at 7:10 p.m. Eastern (watch here).

After six weeks of battling on virtual fields across North America, six different drivers claimed victories. Now, Global Racing Group teammates, Blake Upton, Dario Cangialosi, Dakota Dickerson and Benjamin Pedersen, will take the title fight to the last round in the ultra-competitive online championship. Each have the title and a set of Hankook tires in their grasps, but the legendary Corkscrew will ultimately decide their fates.

Reigning FR Americas champion Dickerson trails points-leader Upton by seven points entering the finale. The California-native has several hours of real-life competition experience at the fabled road course, and knows too well the impact that the blind crest and three story drop turn has on race results.

“Braking is hard in the Corkscrew because the car gets light and there’s a lot of compression at the bottom, so it’s easy to spin if you’re off line,” explained Dickerson after Monday’s open practice. “That’s just the nature of the Corkscrew. But the car felt good in the practice conditions- low air and track temp with little usage.”

Unlike his teammates that trail behind him, Upton has yet to win a race, but his consistent results throughout the six-week campaign secured his spot at the top of the standings entering the finale. Upton’s goal tonight is to not only to clinch the championship but to be the seventh driver to claim a victory.

“I am very excited that the fans chose for the finale to be hosted at Laguna Seca- a track where the slipstream isn’t as important,” said Upton. “The racing will be fun as well, given the limited entries. We have calculating the points math to figure out how hard we need to push today, so I am very much looking forward to it.”

Cangialosi debuted with a strong showing in the opening rounds of the championship, securing a win in Round 2 and a podium finish at Virginia International Raceway that put him at the top of the standings. However, incidents in the last two rounds allowed Upton to takeover first and Dickerson to catch up in the season-long points race. Only five points separate Cangialosi and Upton.

“Laguna is one of the coolest tracks in the country and I’m excited to run there in the FR Americas iRacing Invitational Championship," said Cangialosi. "The goal for tonight is to to stay out of trouble and see where we finish."

Pedersen’s dominate win in the penultimate round at Sebring International Raceway last week catapulted the Global Racing Group driver into title contention, closing the gap on his fellow Global Racing Group teammates who hold the top-three spots in the season-long championship. Pedersen will have to win the last round to seize the championship, respectively.

“Today should be a very exciting race,” Pedersen said. “It’s the finale at Laguna Seca and we have a good shot a the top three in the championship. I look forward to battling it out just as we would on the real track.”

The FR Americas iRacing Invitational champion will win a set of Hankook Tires while the Vice Champion will be presented with a 90-day virtual training package from PitFit Training. Third overall in points will receive an Omologato watch. Sabelt will carry over its Sabelt Hard Charger contingency prize pack complete with product certificate to the driver with the most position advances in the seven-race iRacing championship.

The FR Americas iRacing Invitational Championship standings are based off the FIA Formula Regional points structure. Guest drivers are not eligible for championship points or prizes. The championship will be calculated based on the top six results (allowing one race to be dropped).

With only 20 spots open on the roster, drivers pre-qualified on Monday for the finale.

Live coverage from Apex Racing TV presented by Sabelt starts at 7:10 p.m. Eastern with a swift 10-minute qualifying followed by a 30-minute race and featuring “podium” interviews with the top drivers. Following the race, FR Americas iRacing Invitational Championship drivers will host a LIVE question and answer session with fans on the FR Americas Instagram (https://www.instagram.com/framericas/)

Round 6 Replay presented by Sabelt: https://www.youtube.com/watch?v=NSZCqXro1XQ