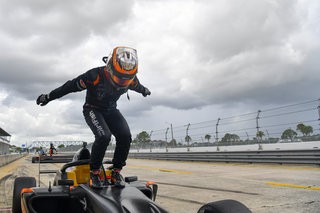 Round 6 replay presented by Sabelt: https://www.youtube.com/watch?v=NSZCqXro1XQ

The Formula Regional Americas iRacing Invitational Championship drivers respected the bumps but not always each other in an action-filled penultimate event at Sebring International Raceway.

In a race with chaos collecting the top drivers through the first two turns of the opening lap, Benjamin Pedersen displayed his mastery of the fabled rough Sebring International Raceway terrain, emerging unscathed to claim his first win in the esports championship. The victory catapulted the Global Racing Group driver into title contention, closing the gap on his fellow Global Racing Group teammates (Blake Upton, Dario Cangialosi and Dakota Dickerson) who hold the first spots in the season-long championship.

Pedersen swept the three-race FR event in the regular season in 2019, and with the virtual win on Tuesday, his record remains undefeated at Sebring International Raceway.

“That was a pretty exciting race and a hairy first lap,” “I am happy to finally get my first iRacing FR Americas win. I love Sebring, it has such a nice flow. Once I get into the rhythm, it’s such an amazing track. It was nice to be able to compete. It’s a lot of fun, but very serious. We get very competitive between each other, but always get a nice laugh at the end.” 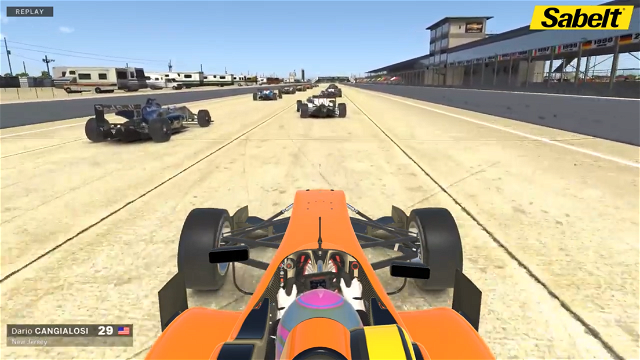 Off the F1-style standing start, Sikes got the jump off the line but Porcelli quickly took the lead with an inside pass entering Turn 1. But with a combination of a 125-degree track and cold tires, Porcelli lost control, spinning at the exit of Turn 1. In a tight corner with more than 30 cars behind him, Porcelli’s incident caused a domino effect of drivers trying to dodge sideways cars and debris, collecting seven drivers in the wake.

Lall inherited the lead briefly before Round 1 winner Ben Waddell passed at the chicane. But, while Waddell was focused on Lall, Pedersen drafted off the pair to make a two-car pass for first.

After exchanging positions multiple times with Waddell for second in the first half of the race, Nelson Mason finally fended off Waddell. On his way to closing the gap on Pedersen, Mason set the fastest lap of the race with a time of 1:53.987-seconds. With Pedersen in his grasp, the clock ran out on Mason’s charge for victory and would have to settle for a second-place finish.

“Benjamin Pedersen ran a tremendous race, and I had to be pretty perfect to make the gains,” said Mason. “Ben Waddell and I were trying to work together but we both wanted to be in front, so I think that cost us a bit. It was a great race and I can’t wait until the finale.”

“It was a hard fought race and I got lucky there at the start as the sea parted,” “Overall I like the track combo with these cars. It was a wonderful battle with Nelson Mason, we both had the pace to catch Benjamin Pedersen but neither of us wanted to give up position. Which is ok because we had so much fun battling each other.”

Ellis Spiezia dodged several incidents on his charge from a near last place start to finish 10th, making up 20 positions along the way. FR Americas rookie Jordan Missig still leads the Sabelt Hard Charger season battle with a total of 57 advances. The Sabelt Hard Charger contingency prize pack, complete with a Sabelt product certificate, will be awarded to the driver with the most position advances in the seven-race iRacing championship.

The FR Americas iRacing Invitational Championship returns to action on Tuesday, May 5. Fans will set the stage by voting where the finale will be held. Streaming starts at 7:10pm Eastern.

The event schedule will include one 10-minute practice, one 10-minute qualifying and one 30-minute race with points following the FIA FR system. The championship will be calculated based on the top six results (allowing one race to be dropped).