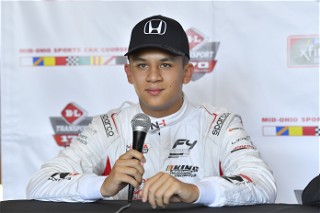 “I am thrilled to Join GRG for the 2020 season,” Hays said. “They run a very focused, professional program and I am excited to see what we can do together.”

In 2019, Hays entered the French F4 Championship after earning the Richard Mille Young Talent Academy scholarship for showing his skills and poise on an off the race track. Hays went on to finish third overall in his rookie French F4 campaign.

With his options open for 2020, the nationally-ranked karter knew FR Americas was the right choice to springboard his open wheel career in the United States.

“When Honda made the announcement that the FR Americas championship winner would receive a scholarship to enter the 2021 IndyLights season, that was my final deciding factor to join the FR Americas Championship,” said Hays. “There’s no other scholarship opportunity at this level of competition like that in the world.”

Global Racing Group won consecutive team championships in 2018 and 2019, and secured the driver championship last season. With a stacked lineup of title-holding drivers already announced, along with two notable drivers remaining to be revealed, GRG has made moves in the offseason to be the team to beat again in 2020.

“There is a great saying: Talent breeds talent, and that’s what we’re focusing on with the program we drive. We’re very excited to welcome Nicky Hays to GRG after some impressive tests, and he will fit right into the program” says Christian Pedersen, President and CEO for GRG. “After having followed Nicky’s campaign in France and staying in touch with his Team Principal over there, it was with high expectations we tested Nicky late last year. His ability to collaborate, listen, provide feedback and relentless focus on self-improvement are traits that will take him far and will make him fit right in with the team. We will see Nicky frequent the podium this year!”.

The Formula Regional Americas Championship Powered by Honda season will continue in June with an updated schedule to be announced in the upcoming weeks. For more information on FR Americas, visit FRAmericas.com. For Global Racing Group ride opportunities visit, www.globalracinggroup.com.