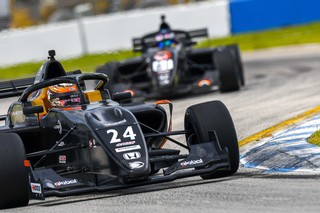 Blake Upton started the season off strong, earning the most points in Round 1 as the first FR Americas driver to cross the stripe. Upton went on to score four more top-five results, edging out FR Americas rookie Dario Cangialosi in the standings by six points to take the championship lead (72 points total).

“I am happy to be in the lead of the championship heading into the final rounds,” said Upton. “The FR Americas iRacing Invitational Championship has been a very fun opportunity to take part in during these times of uncertainty. It’s taken a lot of hard work and a little bit of luck to be in that position so I can’t wait to see what the final rounds bring us. The racing will be good no matter what!” But, Cangialosi enters the penultimate round with one thing Upton hasn’t accomplished yet in the five rounds, a win.

The first-year GRG driver has experienced highs and lows throughout the FR Americas iRacing season, starting the season off strong, with a victory, a podium finish and top points in the first three rounds. However, at Barber Motorsport Park and Canadian Tire Motorsport Park, Cangialosi was involved in incidents that put him out of podium contention. While he finished both rounds scoring points, it wasn’t enough to keep Upton from sliding into first in the season-long points battle.

"I am excited for the sixth round of the FR Americas iRacing Championship,” Cangialosi said. “Sebring always provides some great racing and the championship is sitting close now. I just have to hope for good luck in the races moving forward.”

While Cangialosi’s focus is on Upton, he also has the reigning FR Americas champion to worry about. Dakota Dickerson trails Cangialosi by just four points heading into Sebring and is just 11 points away from taking over the top spot from his former teammate.

Dickerson won the F4 U.S. Championship in 2018 and the FR Americas Championship in 2019. Using the same consistent drive tactic he did to claim consecutive titles, Dickerson’s goal is to add a third championship to his growing list of accolades next week during the finale.

“Competing in the FR America’s iRacing Championship has been a lot of fun and it’s been great competing against former teammates and future FR Americas drivers,” said Dickerson. “I wasn’t sure what to expect at first, but the competition has been fierce and the on-track battles have been very intense, similar to the real championship. Heading into Sebring, I’m looking to stay consistent and out of trouble. It’ll be important to qualify well and hopefully I can snag another win to boost us into the championship lead.”

Joining the grid this week to add another wrench to Upton’s quest for the championship is F4 U.S. title holder Joshua Car. Car will compete for the remainder of the Esports championship, looking to steal valuable points from the season-long competitors.

“This is all very exciting for me, racing against competitors that I will see in the real world,” said Car. “I want to say a huge thank you for Euroz Driver Performance forletting me hop in its simulator for the last two races in the championship. It’s going to be a blast.”

The FR Americas iRacing Invitational champion will win a set of Hankook Tires while the Vice Champion will be presented with a 90-day virtual training package from PitFit Training. Third overall in points will receive an Omologato watch. Sabelt will carry over its Sabelt Hard Charger contingency prize pack complete with product certificate to the driver with the most position advances in the seven-race iRacing championship.

The FR Americas iRacing Invitational Championship standings are based off the FIA Formula Regional points structure. Guest drivers are not eligible for championship points or prizes. The championship will be calculated based on the top six results (allowing one race to be dropped).

Live coverage from  Apex Racing TV presented by Sabelt starts at 7:10 p.m. Eastern with a swift 10-minute qualifying followed by a 30-minute race and featuring “podium” interviews with the top drivers. Following the race, FR Americas iRacing Invitational Championship drivers will host a LIVE question and answer session with fans on the FR Americas Instagram (https://www.instagram.com/framericas/)