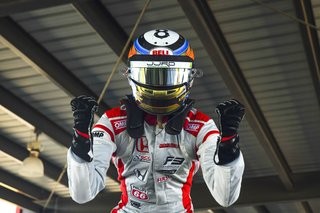 The inaugural F3 Americas Championship Powered by Honda champion Kyle Kirkwood, will join the Andretti Autosport Indy Lights Presented by Cooper Tires team for the 2020 season. The rookie stand-out will drive the No. 28 car for the reigning championship team.

“We are very excited about the addition of Kyle to our Indy Lights program,” said Michael Andretti, CEO and Chairman, Andretti Autosport. “We’ve followed Kyle’s career from when he started in 2018 with the Cooper Tires USF2000 Championship and have been impressed with his success in every race that led to his Indy Pro 2000 Championship last year. As a championship-caliber team, Kyle displays the desire and talent that we look for in our drivers and are excited to see him hit the track for the 2020 Indy Lights season.”

A native of Jupiter, Florida, Kirkwood started his single-seater racing career in 2016 with Formula 4 United States Championship, placing third overall in his rookie season. The following season, he paired up with the winningest team in junior formula racing, Cape Motorsports. Dominating the season, Kirkwood stood on the podium 15 times, nine of those being victories, earning the championship title and a scholarship to enter the inaugural season of F3 Americas Championship Powered by Honda in 2018. During his full season run with Abel Motorsports in F3 Americas, Kirkwood lead nearly a perfect season, winning 15 of the 17 races.

In that same year (2018), Kirkwood participated in the USF2000 Championship where he claimed 12 wins in 14 races to win the championship. Earning another scholarship to compete in the Indy Pro 2000 Championship, Kirkwood won nine races in 2019 in his fight for the series title.

Without a family background in racing, Kirkwood earned four championships in three years. Since 2017, the 21-year old racked up 47 wins and 55 podiums in 71 starts.

“I am ecstatic that I can now say I am competing in Indy Lights with Andretti Autosport this season,” said Kirkwood. “They have established a winning program in Indy Lights and we plan on carrying that reputation throughout 2020. We are a fantastic match for each other and our Sebring test in December proved that.”

Kirkwood will take to the streets of St. Petersburg, Florida, for the Indy Lights season opener March 13 – 15.