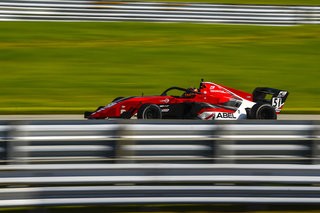 The 2020 Exclusive Racing Formula Pro USA F4 and F3 West Coast Winter Series kicks off this weekend at the famed Auto Club Speedway in Fontana, California. With the first two races in the four-race program, exponential growth in the Winter Series will see an increase in drivers and teams as several national level competitors make the trek west to prepare for their upcoming season. With awards and prizes up for grabs, including more than $6500 worth of tires from Hankook Motorsports, the first green flag of the season will fly Saturday afternoon.

"We are really excited about what our series will bring this year," explained Exclusive Racing's Brent Morgan. "We have had a lot of interest from teams nationwide, several which have confirmed their intentions to compete with us over the next ten days with drivers and teams coming from as far away as Atlanta and New York. Additionally, with the formation of the Exclusive Racing F3 Winter Series to run alongside our F4 effort, we have made our program more appealing to the teams who compete in both series."

Morgan added, "We have rookie drivers looking to gain experience as well as veterans chasing prizes and championships. We also have competitors registered that are looking to take part in an organized program at an affordable rate while others are looking to test and prepare for the upcoming season. No matter why they are coming, when the green flag drops, they will all be racing and aiming for the best results possible."

Confirming their participation in the series, Exclusive Racing welcomes Abel Motorsports, Jay Howard Driver Development, Kiwi Motorsport, Margraf Racing, Velocity Racing Development, World Speed Motorsports and more. With local and regional level drivers on the entry list, Exclusive Racing will also see a handful of competitors that have confirmed their intentions in either the Formula 4 United States Championship Powered by Honda or F3 Americas Championship Powered by Honda series in 2020.

Teams will be vying for race wins, podium results, series championships as well as more than $6500 in prizes from Hankook Motorsports. Confirmed back in mid-December, Exclusive Racing announced Hankook Competition as an official series partner to the Exclusive Racing F4 and F4 Winter Series. With all drivers across both platforms required to use the spec Hankook branded tires, the worldwide company stepped up to the plate to award four sets of new tires upon series completion, one to each series champion and one to the driver gaining the most positions over the course of the series, dubbed the Hankook Hard Charger Award.

"Hankook has been a tremendous partner throughout the F3 and F4 programs in the United States, and we are excited to welcome them to the Exclusive Racing family," added Morgan. "Providing a high quality, product, and over the top customer service, Hankook Motorsports brings a great value for our series and our competitors."

With both the F4 and F3 Winter Series Champions receiving a set of brand new Hankook racing tires, Exclusive Racing will award the second new set of tires to the hardest charger over the four race program. With the cumulative positions gained from the start to the finish of each of the four races, the driver advancing forward the most will be named the Hankook Hard Charger and take home a new set of Hankook Tires.

With Friday providing competitors three on track practice session, Saturday will be the home of qualifying and the first wheel-to-wheel competition of the weekend. Sunday will provide the second race as drivers have two opportunities to stand atop the podium.

All official on track action can be followed via Live Timing on the Race Hero App. Please download the application from the App Store or Google Play Store.

Company officials would like to remind all teams and competitors to follow Exclusive Racing on social media by searching @ExclusiveRacingInc. Be sure to tag, mention and share your posts with Exclusive Racing to help us be able to promote you. Additionally, stay tuned to social media for daily reports, race reports, results, photos, information and more.