F3 Americas Focuses on Fitness in 2020 with PitFit Training 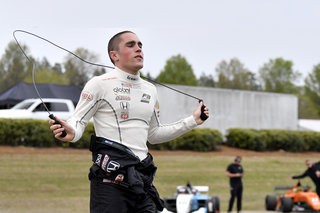 A regimented, tailored, no-nonsense training plan is a must for drivers aspiring to the upper echelons of racing. Motorsport fitness requires its own specific training method to ensure drivers can cope with the physical and mental demands of their disciplines. Recognizing the importance of motorsport fitness early in drivers’ racing careers, SCCA Pro Racing partnered with PitFit Training, the nation’s industry leader in development and implementation of motorsport-specific driver performance, to offer the Formula 4 United States Championship and F3 Americas Championship Powered by Honda drivers a series-specific conditioning program to prepare them for the upcoming season.

“Knowing the rich history the SCCA has in motorsports, it was quite exciting when we were approached to be part of the development of the drivers in the F4 U.S. and F3 Americas championships,” said PitFit Training owner, Jim Leo, who is also a certified strength and conditioning specialist. “We have already worked with several of the series drivers in the past, and after my first visit to meet the entire series at Circuit of The Americas last year, I immediately saw this as one of the strongest and best-organized programs in motorsports.  I fully expect some of these drivers to be competing for IndyCar championships in the future.”

As the new Official Training Partner for both championships, PitFit designed a 90-day online pre-season program to prepare each driver to be at his/her absolute peak levels before the first race of the season (April 9-11 at Michelin Raceway Road Atlanta). The program will focus on:

Revolutionizing the physical and mental conditioning of racing drivers and pit crews from IndyCar, IMSA, Indy Lights, NHRA, Formula BMW, Global Rallycross and many more, the Indianapolis-based fitness facility has had a staggering amount of champions come through its doors since Roger Penske acquisitioned Leo to improve the fitness of his racing team over two decades ago. After securing back-to-back championships in F4 U.S. and F3 Americas, Dakota Dickerson participated in the online training program to refocus his fitness for the more physically enduring IMSA Prototype Challenge Roar Before the Rolex 24 race. In his first race of the season, Dickerson placed on the podium. 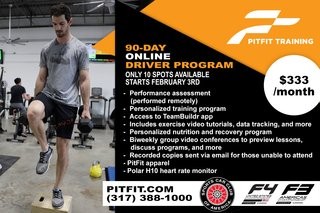 “I started working with PitFit via the online based group training back in October,” said Dickerson. “With their help, I feel ready to attack the IMSA Prototype Challenge season. It’s incredible how effective the program is and I think a large part of that is the extensive experience that Jim Leo and Alex Wanee have in working with top level athletes within the motorsports community. The online program is great because it gives driver the flexibility of being able to train anywhere whether you are traveling for a race, at home, or at their facility in Indy. At the same time, the program is fully custom tailored to each drivers goals and is provided through an app that shows tutorials of each specific workout. The group setting is great because it really helps keep you on track and push one another. All in all I’m super grateful to be a part of the PitFit program and would highly recommend it to fellow drivers competing in F4 and F3.”

F4 U.S. and F3 Americas drivers will also receive discounted personalized fitness plans throughout the year to build on their training goals.