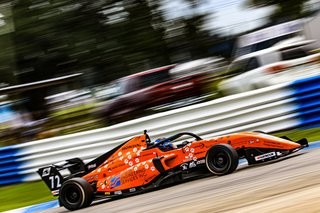 For the past several years, Dakota Dickerson has used his racing platform to raise awareness for two charities he supports which couple his strong respect for our nation’s veterans as well as his love for animals. This past month, the California native focused his attention on Nowzad, a rescue and training organization based in Afghanistan but with worldwide impact. Setting a goal of $1000, Dickerson proposed to race the final event of the F3 Americas Championship Powered by Honda series with the name of each donor’s furry loved one on his championship winning Ligier JS F3 powered by Honda. Within 5 hours of posting the “Paws on a Race Car” fundraiser to Facebook, this goal was achieved! People from around the world donated and the excitement grew heading into the finale at Sebring International Raceway.

“I heard of Nowzad and their story a few years ago and felt very connected with what they are achieving both for animals and veterans alike” said Dickerson. “You see some of the pictures of the animal rescues that they share on social media and they are heart wrenching. The work that Nowzad does is incredible, and I admire them for their dedication and service. I am so grateful that we are able to support this charity with our racing platform. The response we got from around the globe was amazing and I hope that we can continue to help Nowzad in the coming years!”

When soldiers are deployed overseas, they often form bonds with abandoned dogs and cats but are unable to bring them home when their tour of duty is over. Nowzad cares for these battle buddies and helps to raise funds so that these veterans can be reunited with the furry friends that helped them survive their time serving their country. In addition, Nowzad operates and manages the only animal sanctuary in the Afghanistan area and provides vital animal welfare for a variety of different animals in Kabul and developed training programs to improve the relationship between working animals and the Afghan people. 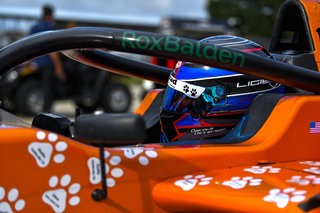 The founder of Nowzad Pen Farthing, commented: “Dakota Dickerson raised a whopping $8,800 by not only kindly covering his Formula 3 racing car in paw prints with our supporter’s beloved pet’s names written on them, he also very generously matched $2,500 himself. Dakota’s fundraising idea was a unique and fun way for folks to support the valuable work that Nowzad is undertaking in reuniting American soldiers with the stray dogs and cats they have adopted whilst serving on the frontlines in Afghanistan. These animals are a positive ray of light for the soldiers during what can be a stressful tour of duty” Farthing added. “Dakota’s ruthless racing ability on the track is intermingled with his compassion and determination for supporting animal welfare. We are now hoping Dakota starts racing trucks next year as we are running out of space on his car...!”

Donations came in from 24 states here in the United States, as well as from Canada, Spain, Brazil, Japan, the UK, and Afghanistan. Not only were dogs and cats represented on the race car but there was also a tortoise, donkey and bird. The total of nearly $8800 will go to Nowzad to help with soldier rescues and to support the sanctuary in Kabul.

Dakota Dickerson has announced that he will join MLT Motorsports for a full season in the 2020 IMSA Prototype Challenge with support from Ligier Automotive.

Dakota Dickerson is a third-generation racer from San Diego, CA. The 22-year old has been racing since he was 6 years old and with Global Racing Group, recently won the 2019 F3 Americas Championship powered by Honda. In his first four years of racing cars, he won a Driver Development scholarship from Bryan Herta Autosport (2-time Indianapolis 500 winning team), a Karts to Cars scholarship from Skip Barber Racing School, was chosen to be one of two drivers to represent the United States overseas via the Team USA Scholarship, was the 2016 USF2000 Mazda Scholarship Driver, and won the 2018 F4 US Championship. With this success, he hopes to continue on to the NTT INDYCAR Series.

Nowzad (www.nowzad.com) is an organization whose purpose is to relieve the suffering of animals in Afghanistan; including companion animals, working equines, stray and abandoned dogs and cats and all other animals in need of care and attention, by providing and maintaining rescue, rehabilitation and education facilities for the care and treatment of such animals with no voice. Nowzad carries out all the necessary checks and paperwork to get the dog or cat to their loving home, wherever it is, in the world. War zone rescues include Afghanistan, Iraq, Ukraine and Libya and the new homes for the animals include USA, UK, Australia, Belgium, Canada, France, Germany, Holland, Italy, Spain, Jordan Thailand and South Africa.