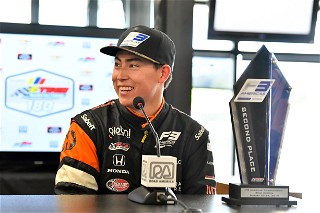 Dakota Dickerson is one of those drivers who never lets anything get to him.  He keeps his head up and charges forward all the time. Talent, combined with perseverance and a great attitude, is what champions are made of.

This weekend, Dakota Dickerson clinched the Championship during Rounds 12 & 13 of the F3 Americas Championship powered by Honda at the fabulous 4.1-1mile Road America circuit. One could say it was a repeat performance of last year, when he won the F4 US Championship with several races left in the season. And, he admits that winning back-to-back Championships feels pretty fantastic.

Road America is listed among every driver’s favourite track. Surrounded by nature, its beautiful grounds filled with trees and camping sites attract many fans from all over, year after year. The drivers all agree that Road America has great race fans.

On Friday morning, Dickerson qualified well, placing him second on the starting grid for the first race of the weekend, in perfect mid-day 70-degree weather.  Just after the green flag, Dickerson’s #72 Honda Ligier JSF3 charged to the front to take the lead but contact with a teammate going into Turn 1 caused him to enter the pits with mechanical damage. The Global Racing Team worked feverishly to repair his car, however when he finally did rejoin the field, it was too late for him to gain positions for points.

“It was an up-and-down day today” said Dickerson. “We got caught out in qualifying with red flags, but still managed to start off-pole. After getting a decent start, I was making a move for the lead but unfortunately, I was hit from behind, and out of the race. We had good pace all weekend, and I know we’ll bounce back tomorrow” added the San Diego native.

Later that afternoon, in his usual pleasant disposition, the 22-year old driver enjoyed signing autographs for all the fans who were lined up.

The perfect weather was back for Saturday’s race. Although Dickerson was starting from the back of the field, he knew he had a good car for the race. As soon as the race went green, the California hot shoe had a great start and wasted no time moving up towards the front of the field all the way up to second place and drove consistently until the end of the race. He took the second step of the podium, next to his teammate Ben Pedersen who finished first. His 2nd place finish was all it took for him to clinch the Championship. 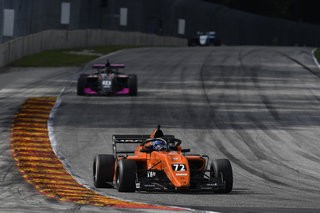 Dickerson was elated when he stepped out of the car and was quick to give credit to his Global Racing Team for all their hard work throughout the season.

“It’s an awesome feeling being able to clinch the Championship today” he said. “It was an uphill battle in the race having to start from the back, but we got a flying start and made our way up to second in the first lap. From there, it was just a matter of staying consistent and getting the points that we needed. I can’t thank the Global Racing Team enough for their tremendous effort and support. We’ll celebrate this weekend and keep our heads down to look for some wins at Sebring.”

Dakota Dickerson is already looking forward to the final three races of the season on September 13-15 at Sebring International Raceway where he will be joined by his Texas supporters.  Fans will be able to follow live timing and scoring on F3Americas.com or on the Race Monitor app.