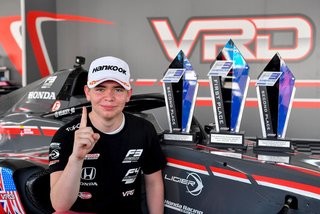 It was a breakthrough weekend for Atlanta, Georgia based Velocity Racing Development (VRD) as the team managed to secure their first career F3 Americas Powered by Honda series victory this past weekend at the Virginia International Raceway. Mathias Soler-Obel led the way at VIR as he leveled up from his second place results on Saturday afternoon and Sunday morning to take the checkers Sunday afternoon scoring his and the team's first victory of 2019.

"It was great to finally get our first win. We have always had the speed but sometimes have struggled to know what to do with it," explained VRD's Dan Mitchell. "It's important we move on now, remember that winning feeling and chase more victories at both Road America and Sebring."

After qualifying third for race one on the weekend, Soler-Obel went three for three with podium finishes over the standard F3 Americas triple header weekend finishing second, second and first. Battling at the pointy end of the field throughout the weekend, the young Colombian driver broke through in Round 11  to add the title F3 Americas race winner to his resume. 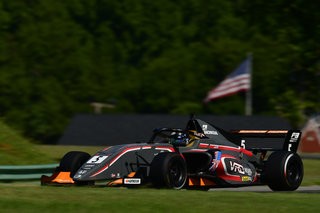 Mitchell continued, "It was only a matter of time before Mathias was on the top step. He and his family have dedicated their time, resources and trust to our program, and we thank them for their patience and efforts."

Dominic Cicero added a fifth place result in round nine and 10h place finishes in rounds 10 and 11 to claim top honors in the F3 Americas Masters class while Parker Locke added a pair of top-ten results finishing ninth on Saturday and added another ninth place result on Sunday. Showing great speed throughout the event weekend, Locke was a victim of some mechanical issues and though he had the speed for solid finishes, gremlins kept him from the podium blocks

Michael d'Orlando flew the VRD flag in the Formula 4 United States Championship Powered by Honda series as he secured a top-five result after being out of the racing seat for more than a year. Continually improving throughout the race weekend, d'Orlando finished 10th on Saturday, but made drastic improvements on Sunday afternoon to end his weekend with an impressive fifth place finish. 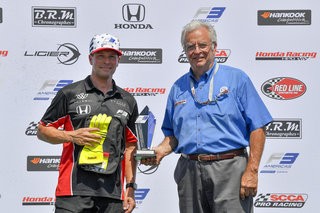 Mitchell added, "'Michael improved significantly over the weekend making huge steps forwards. He keeps on getting better and better. After being out of the car for 12 months, it's not going to be an instant process. In the final race of the weekend he made some great moves battling to fifth place which was a great finishing position for his first weekend back."

The F4 United States Championship Powered by Honda will have a quick turnaround as series competitors will be back on track in less than two weeks at the Mid-Ohio Sports Car Course for rounds 10-12  while F3 Americas drivers will enjoy a month away from competition before returning to Road America at the end of August.