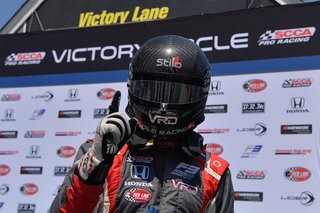 Soler-Obel has shown fast results in practices and qualifying in the first half of the season, but in-race mechanical issues and rookie missteps have kept him from the podium. But during the three-round Andy Scriven Memorial Race weekend at a very technical circuit, everything came together for the young Colombian. Soler-Obel topped his own lap record, visited the podium three times with two second-place finishes and a win, and earned valuable points to jump up three positions in the overall championship into fifth place.

Benjamin Pedersen, who won the opening two rounds of the weekend, finished second with Quinlan Lall completing the podium in third, his second of the event.

“It feels really good to win my first race,” Soler-Obel said soaked head to toe in water after his VRD crew drenched him in post-race celebrations. “My parents have brought me really far and I couldn’t have done it without my team. Just filled with a lot of joy right now.” 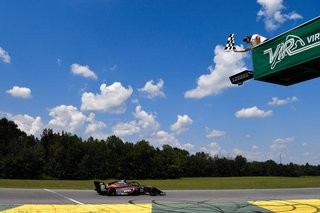 Soler-Obel started in pole position after setting the VIR in-race lap record (1:44.015) in Race 2 with Pederson sharing the front row on the outside. Lining up for the F1-style standing start in Row 2 was Dickerson and Lall with VRD teammates Dominic Cicero and Parker Locke in Row 3.

As the lights went out, Soler-Obel was quick off the line. The VRD rookie and Pedersen matched speed entering into Turn 1 side-by-side, but it was Soler-Obel driving the No. 14 Equidem Management VRD machine who won the battle. Determined to get the top-step that eluded him earlier in the weekend, Soler-Obel continued to gain speed. Building a nearly seven-second lead in the full-green 35-minute round, Soler-Obel left the rest of the 13-car field to sort out finishing position as the seventeen-year-old never relinquished his first-place position.

“We’ve been fast all three races,” said Soler-Obel. “This weekend we really worked the car and team really hard. I kept it on track all weekend and was able to challenge up front. The results finally came.

Pedersen’s fight to complete the hat trick for the weekend ended, as he had to switch focus from trying to run down Soler-Obel to Global Racing Group teammate Dakota Dickerson and Lall pressuring from behind. As in the first half of the weekend, Pedersen and Dickerson were pretty evenly matched, but Dickerson made a huge move in the Roller Coaster to overtake Pedersen for second. While on the hunt for first, Dickerson faced mechanical issues that caused his orange No. 72 Stress Engineering to slow, leaving Pedersen and Lall to sort out who would take second.

“I am really disappointed with how the weekend finished out.”  Dickerson. “We had the pace throughout the weekend to win races but it wasn’t meant to be. Our front wing broke early in Race 2, and the clap for the intake to the turbo broke in Race 3 while we were challenging for the win. We’ll keep our heads down and focus on the next event. I know how hard these Global Racing Group guys work and have full confidence we will back on the top step at Road America,” said  championship leader Dickerson, who rallied to finish fourth despite the hardships in the final round.

Competitive all weekend, Lall was a newly added threat to F3 field last event. Charging hard at Pedersen, Lall tried to use the tow to get around, but Pedersen defended his positing to keep Lall’s No. 49 Momentum Motorsports Ligier in third.

Joining Momentum Motorsports last event to fill in for Shea Holbrook (who missed due to scheduling issues), Lall returned to the lineup for the New York-based squad after a brilliant performance at PITT Race. His talent continued to show at VIR as the New Jersey-native challenged up front in all three rounds to take two third place finishes and a top-five result. In just six rounds, Lall is already seventh in the season-long championship. 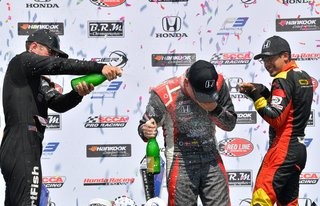 “Considering how my week started not know if I was going to be in the car, I am really happy with a double podium,” Lall said. “At the end we showed our true pace and finally got me comfortable in the car. Very happy with the results. The Momentum Motorsports team worked really hard this weekend, especially with the last minute changes I threw at them. I couldn’t have asked for anything more.”

The Velocity Racing Development team continued its success down the line as Cicero netted 10 points for the weekend to earn the Masters Cup contingency award and the Sabelt Hard Charger award for making four progressive passes in the first round at VIR.

“It’s been a team effort this weekend,” said Cicero after receiving his $500 cash prize and pair of Sabelt gloves. “The VRD team has worked hard all season and the results are showing. I would like to thank everyone who’s supported me this season.”

The next stop for F3 Americas Championship is to support NASCAR Xfinity Series at Road America, which is another new track on this season’s schedule, Aug. 22-24. For photos, post-race videos and full results, visit F3Americas.com.