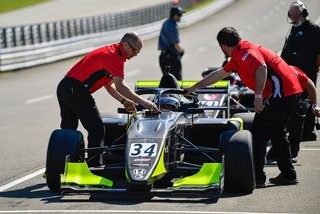 "We took advantage of the two test days early last week to get our drivers up to speed, equipment sorted out and test different setups," explained Phil Picard. "With two of our three drivers new to the F3 program this weekend, it was a welcomed opportunity to make sure everything was 100% ready for the weekend. In the end, we secured our third podium result of the year and have done so with three different drivers."

Picard continued, "It was a disappointing first race of the weekend for us as nothing seemed to go our way. Megan managed to gain four positions to finish ninth but both Quinlan and Kent finished down the running order."

Regrouping and returning to the track on Sunday, Lall found his way to the front half of the field during round seven and secured a fourth place finish when the checkered flag flew. Happy with his Momentum Motorsports prepared machine, the series rookie was excited about his chances in round eight later that afternoon. Vaccaro rebounded from his finish the previous day to garner a top-ten result in ninth while Megan Gilkes was classified in the 13th position. 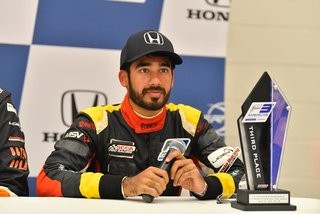 Round eight provided Momentum Motorsports with their best result of the weekend. Quinlan Lall challenged at the front of the field and was able to provide the team with a third place podium result, their third podium finish of the season. Vaccaro matched his finish from earlier in the day to finish ninth while Gilkes again finished P13.

"This podium was one that the entire team deserved. We had consistent pace throughout the test days and really built it up as the week progressed. The mechanics kept providing great equipment and the engineers always gave me a great car, which kept building my confidence every time I went out," explained Quinlan Lall. "When the weekend came, it was all about execution. We missed the setup a little bit on Saturday, but Sunday everyone was spot on. The car setup was good, and it kept us right up front. At the end, it was all down to beautiful execution in every aspect of the race operations that brought the team the podium this weekend."

Picard added, "We have secured our third podium result with three different drivers, a Hard Charger Award and a pole position in 2019. This is proof that our cars are fast and can be at the front of the field. Both Kent and Megan ran into some issues over the weekend. Kent drove incredibly well for having two sets of flat spotted tires, one from being punted in race one by a fellow competitor and another set was damaged pushing for a lap time and having a major lock up in a braking zone. Holding off drivers even with damaged tires, Kent will be a force at VIR in a few weeks' time. Megan was a victim of a spin in both race two and three that put her behind the field. Hoping for a caution that never came, she was unable to make any headway on the results sheets."

With a month away from competition, Momentum Motorsports will now begin their preparation for the Virginia International Raceway event over the July 26-28 weekend.

For more information on test and/or race opportunities with Momentum Motorsports, please contact Phil Picard at phil@philpicard.com or visit the national level race team online at www.MomentumMotorsportsLLC.com or via their social media pages on Facebook, Twitter, and Instagram.