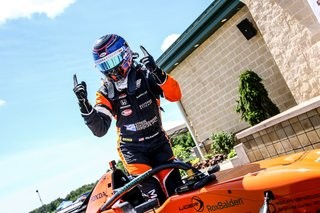 If Dakota Dickerson was a baseball player, one could say that he “hit it out of the park” this past weekend. The San Diego native mesmerized everyone at the Pittsburgh International Race Complex during Rounds 6-7-8 of the F3 Americas Championship Powered by Honda this past weekend by taking home three “Flag-to-Flag” victories.

“Weekends like these rarely happen in racing” said Dickerson. “We finished the weekend with three poles, three fast laps, three wins, a track record and the points lead. The Team and I worked flawlessly this week at Pittsburgh and the results showed it. It’s been a tremendous effort to get where we are, and we will continue to build off this momentum as we go to VIR.”

Saturday morning’s session saw Dakota Dickerson break the Pittsburgh qualifying track record and take the pole with a fast lap time of 1:32.375. The 22-year old racer credited his Global Racing Group guys for putting together a great setup, not only on his #72 Stress Engineering Services machine, but for all his teammates, as three of the four GRG cars ended up in the top-five. 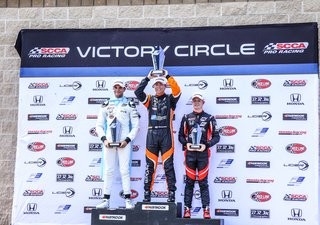 The first race of the weekend was the beginning of a great stint, as Dickerson showed what he was made of and drove solidly, right from the start, building a 3-second gap between his #72 F3 Ligier Honda and teammate Baltazar Leguizamon’s car, within four laps. On Lap 15, a full-course caution was brought out when Kent Vaccaro’s #25 car stalled on track after tangling with the #25 car of Dominic Cicero. During the yellow laps, Leguizamon managed to catch up to Dickerson, and on the re-start, both drivers worked hard to keep their pace. A few laps later, Dickerson, who had driven a good part of the race with a broken front wing was happy to take the checker and score his first win of the weekend, while recording the “Fastest Lap of the Race”.

“We had a bit of bad luck during race 1 with the broken front wing flap” Dickerson explains. “About halfway through the race, I noticed significant loss of the front grip and with my teammate Baltazar Leguizamon closing in, I knew I needed to adjust my driving style in order to keep our #72 Doug Mockett & Co., Ligier JSF3 up front. It reminded me of having the grip of the F4 car with the extra 140 hp of the turbo charged Honda K20 engine. Nevertheless, our Hankook tires withstood the added stress, and we took home our first win of the weekend.”

On Sunday morning, the temperature was in the low 70’s and presented perfect track conditions for the race. Starting from the pole again, Dakota Dickerson kept his focus, stayed out front and led the field during the whole race. Once again, he ran the “Fastest Lap” of the all-green race and grabbed a second victory.

By Sunday afternoon, the weather had warmed up to high 70’s and the F3 Americas field of cars took the green flag on a much hotter track, while all the drivers appreciated their Hankook tires on the last run of the weekend. For Dickerson, Round 8 was a carbon copy of the morning’s race. The young Californian conquered the 2.8-mile Pittsburgh circuit and drove flawlessly right to the end, where he captured his third win while again recording the “Fastest Lap”. After the race, during his podium interview, Dickerson demonstrated his professionalism when he kindly took the time to thank and mention all his sponsors and his team. His teammate Baltazar Leguizamon also had a great weekend as he took the second step of the podium for all three races. Overall, a great weekend for the Global Racing Group team. 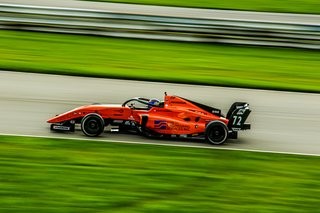 When you go “Three for Three Wins”, with “Three Poles”, “Three Fast Laps”, and a track record in one weekend, it is safe to say this was an awesome, stellar and perfect weekend.

Join us for the next F3 Americas event on July 26-28 at Virginia International Raceway. Fans will be able to follow live timing and scoring on F3Americas.com or on the Race Monitor app.