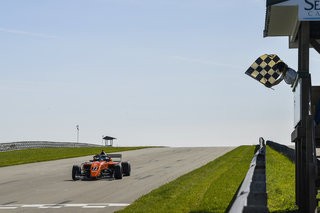 It was a dream weekend for Dakota Dickerson of San Diego in F3 Americas Championship Powered by Honda. During the midseason event at Pittsburgh International Race Complex, the Global Racing Group pilot dominated the triple-round of racing, finishing the weekend with three wins, two track records, three pole-positions and the fastest time in each of the three race sessions.

“It’s been an awesome weekend for the Global Racing Group boys with one-two in all three races,” said Dickerson. “It was really good racing all weekend, and we have some really great momentum going into VIR.”

Dickerson’s No. 72 Stress Engineering Honda-powered machine controlled the pace from lights to flag in all three races. He finished the weekend with more than an eight second overall margin of victory over three-time second place finisher Leguizamon. 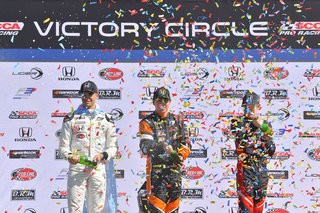 “I knew if I made a mistake, Baltazar would be right there to take my spot,” Dickerson explained. “My goal was to maintain the gap and tire grip to finish the weekend on top.”

A master of standing starts, Leguizamon began the opening round in Row 2. Getting the jump in his No. 9 “banana split” Motorola Ligier on a wheel spinning Abel, Leguizamon never faltered from the P2 spot for the rest of the weekend. After experiencing some tough luck at Road Atlanta, Leguizamon feels his season is back on track following a solid PITT Race performance.

“Dakota has the luck of a champion, but we were gaining on him, especially in that last round,” Leguizamon said. “The draft again was the biggest problem this weekend. It is difficult in this situation to pass because of the downforce and dirty air. But, we are getting closer in points and hopefully our luck carries over to the next race. I had my first win ever in the U.S. at VIR in F4, so I hope to repeat that with my first win of the season next race.”

Abel lead the championship by a single marker heading into PITT Race, but his metalic red, black and white No. 51 Abel Construction car spent more time fending off competitors than challenging for a better podium position. 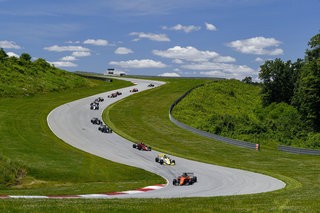 In the opening race, Leguizamon pulled a gap on Abel after the Abel Motorsports driver tried to hold his racing line over a very hungry John Paul Southern Jr. Following a race-long battle, Abel held position, but his work wasn’t over. In Race 2, Southern continued to pressure Abel for the last step on the podium. Abel eventually shook Southern, however, Lall was right there to take his place. Abel once again took third, but at the sacrifice of lap time.

Starting from sixth in the final round, Abel couldn’t keep pace. Losing a significant amount of momentum, he fell just outside of points to finish the round in 11th, his worst finish of the season.

“We tried a few set-up changes, and they weren’t as successful as we hoped,” explained Abel. “We are running a single-car team against these four-car juggernauts like Global, but we are a resilient team with a no-quit attitude, and that will really show as the season progresses.”

Filling in for Shea Holbrook, Lall made his return to the open-wheel scene, proving he belongs behind the wheel. With little seat time prior to the event, Lall put the pressure on the championship contenders starting in qualifying. As the weekend progressed, his Momentum Motorsports Ligier JS F3 turned faster lap times, eventually landing him in the top-three.

“This weekend was a learning experience,” Lall said. “As the weekend went on, I got more comfortable with the tires and the car. I felt like I was getting better. Momentum gave me a great set-up. Baltazar got a great start in that last race and I just couldn’t keep pace with him or Dakota because I made some rookie mistakes. All-in-all it was great debut weekend and I’m very happy with the outcome.”

Southern experienced his best overall weekend of the season with a pair of fifth-place finishes and a fourth. 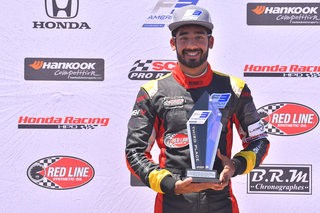 “It’s finally coming together for the Southern Motorsports team,” said Southern. “This weekend we were racing for more than just points. I had a bit of pressure to get good results since people were making donations to University Hospitals Rainbow Babies & Children’s Hospital in Cleveland based on my standings. We are happy with the way the weekend went and we’re glad that we could raise so much money for the children who visit UH.”

W Series competitor Megan Gilkes of Richmond Hill, Ontario, made her F3 Americas debut at PITT Race with Momentum Motorsports. She completed the event with championship points. All 16 competitors who’ve entered the F3 Americas Championship this season have put points on the board, making it one of the most competitive fields in the FIA-supported regional F3 series around the world.

“We made great improvements over the weekend,” said Gilkes. “The Momentum Motorsports Honda-powered Ligier is an amazing car. It was well set up, balanced and overall a joy to drive. It gave me great confidence at a track that I’ve never driven on before. Thank you so much to Momentum Motorsports, F3 Americas and the W Series for making this weekend possible The Momentum team has worked extremely hard to make the car perform so well and I am fortunate to be part of such a great team.” 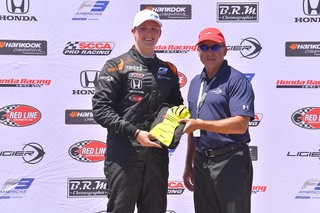 For the second consecutive weekend, Blake Upton of Sammamish, Washington, earned the Sabelt Hard Charger award for making eight progressive passes for the weekend.  After experiencing mechanical issues earlier in the week during official testing, Dominic Cicero of Portland, Oregon, recovered, netting one point for the weekend to earn the Masters Cup contingency award.

The F3 Americas teams and drivers travel to VIRginia International Raceway for the first time July 26-29 for Rounds 9-11. For series, driver or team information, visit F3Americas.com