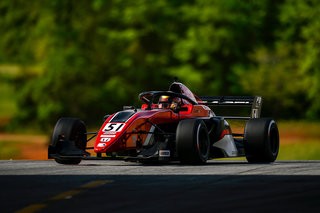 The pageantry of the Indianapolis 500 doesn’t stop with on-track events as the greatest spectacle in racing offers an abundant of activities around the circuit for fans. For the fourth consecutive year, the Formula 4 United States Championship Powered by Honda car will be on display at the Indianapolis Motor Speedway during Indy 500 weekend, and this year the F3 Americas Championship Powered by Honda car will also join the exhibit full of Honda-powered racing machines.

Starting on Carb Day, the red, white, blue and black No. 5 Jay Howard Driver Development F4 U.S. car and the championship-leading metallic red and black No. 51 Abel Motorsports F3 Americas car will be on display in the Honda Fan Zone, located in the Fan Midway inside IMS.

“It's an honor to have my car back at IMS this year on display in the Honda Fan Zone” said Wyatt Brichacek, 17, pilot of the No. 5 CSU One Cure Lucas Oil F4 U.S. car. “Thanks to Honda Performance Development for all the work they have done for the series. I am very proud to have my car represent the F4 U.S. Championship and my team Jay Howard Driver Development.”

The Honda Fan Zone will host a variety of Honda and Acura street and racing vehicles along with daily activities held on the Honda Racing stage where fans can win autographed posters and other premium branded Honda merchandise.

“Getting to share the same stage as a legend like Mario Andretti has to be one of the highlights of my career so far,” Abel, 18, said. “It’s also great to see the F3 Americas car represented at the 500. It looks quite different from any other race cars that will be on display, so it will gain attention from fans attending from all over the world. The car looks amazing and it’s great to see F3 Americas getting some much-deserved attention.”

HPD supplies all F4 U.S. and F3 Americas Championship cars with Honda Civic Type R engines detuned to meet FIA regulations and series-restricted specifications. As the next step in the SCCA Pro Racing and Honda open-wheel championship ladder, the F3 Americas car has a boost in horsepower over the F4 car, offering more than 140 extra turbo-charged HPUs.

“One of HPD’s goals is the to help develop the next generation of North American racing talent for our open wheel and sports car programs,” said John Whiteman, Manager of HPD’s Commercial Motorsports group. “The F4 and F3 series, using reliable and powerful Honda engines, allow participants to maximize their time on track to hone their racing skills, and we’re excited to have these cars on display here in Indy.”

Spectators attending race weekend can take pictures by the JHDD F4 U.S. and Abel Motorsports F3 America Championship cars on Friday from 9 a.m.-3:30 p.m., on Saturday from 10 a.m.-3:30 p.m. and on race day starting at 6 a.m. For fans unable to attend the festivities, drivers will be taking over the F4 and F3 Americas Instagram pages. Follow live updates on Instagram @F4USChampionship or @F3Americas.