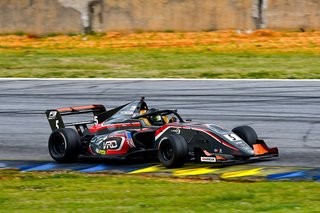 With a trio of F3 Americas Americas Championship Powered by Honda drivers on track for rounds three, four and five and one entry for the opening round of the Formula 4 United States Championship Powered by Honda, Velocity Racing Development (VRD) showed speed and grit as they progressed through their race weekend. Taking on the Road Atlanta facility in their home event on the 2019 calendar, results did not match the pace for VRD, as racing luck would not be on the team's side at Road Atlanta.

"My verdict on the weekend is quite simple," explained VRD's Dan Mitchell. "The team and drivers all did an outstanding job with standout performances from each and everyone of them. We were hindered massively by qualifying being cancelled, in which I feel we could of had all three cars in the top-five in F3 and Oliver Clarke was comfortably fast enough for top-six in F4. Congratulations are in order for Parker Locke who secured his career best finish and VRD's first ever podium. Let's see if he can go one better at the next event."

With a severe storm moving through the area on Thursday evening and onwards into Friday, series officials decided to cancel qualifying. Lining up the F4 United States Championship drivers by practice day times, and F3 Americas pilots by points from the opening event weekend, the starting positions for race one were not reflective of speed, thus providing a mixed grid that would ultimately effect the overall outcome of the race.

Leading the way for VRD results was Parker Locke in his F3 machine. After running inside the top-five during Thursday's practice sessions, Locke secured his first podium of 2019 with a strong second place result in round four, and backed that up with a pair of top-ten finishes in rounds three and five. 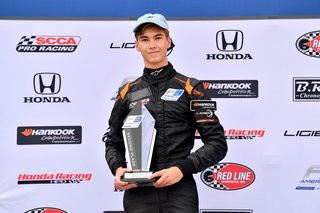 Mathias Soler Obel looked to be the driver to beat on the weekend. After progressing through Wednesday's Promoters Test Day as one of the fastest drivers, and then topping the final official practice by a healthy margin, wheel-to-wheel action was not kind to the young driver. With an on track incident, Soler Obel and VRD are putting the weekend behind them as they shift their focus to the Pittsburgh International Race Complex in eight weeks' time.

Dominic Cicero added a fifth place result in round three, along with a tenth place classification in round four as he continues to lead the F3 Americas Masters Championship points battle.

Oliver Clarke overcame adversity in race one to claim a 12th place result in race two en route to the second fastest lap time. After a fire nearly destroyed his F4 machine, Clarke put the disappointing 24th place result behind him and focused on the rest of the weekend. Driving from 25th to 12th in race two, the young Brit scored his first top-five of the season in race three coming home fifth, and providing a boost of confidence and momentum for the next race weekend.

With nearly eight weeks off, VRD will return to their home base of Atlanta Motorsports Park and continue to test, develop and increase the speed of their program. With opportunities to test and race with the elite level program, interested parties are asked to contact Velocity Racing Development.