No Luck for James Roe Jr. at Road Atlanta 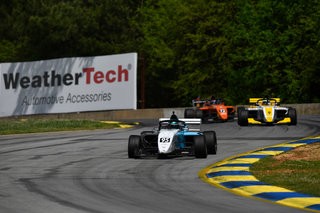 In another soggy race weekend, James Roe Jr. and his Global Racing Group squad battled hard in rounds three, four and five of the F3 Americas Powered by Honda. Taking on the famed Road Atlanta, Roe managed to secure fourth and sixth place finishes after placing in the top-five in Thursday's official practice sessions and maintains the fourth position in the chase for the 2019 championship.

"Our pace does not match our results in 2019 as we have consistently been in the top-five on the time sheets, but the results show different," explained Roe. "There were tricky conditions again this weekend, much like round two in Alabama where we raced in both wet, but drying conditions. It is difficult for the crew to make the best decisions, but the Global Racing Group guys are on top of their game and make the right calls 100% of the time."

With qualifying cancelled due to torrential rain, lightning and damaging winds, the grid for race one was set based on 2019 series points. Courtesy of his results at the Barber Motorsports Park less than two weeks ago, James Roe Jr. started round three from the fourth position, and quickly rocketed his way into second. With a podium position in his grasps, a late race caution would bring out a short dash to the finish and the all-important restart.

Roe continued, "I did not anticipate the late restart the best and was off throttle when the leader was on it. Losing ground, I immediately went to defend but the third and fourth place drivers got a great start, and there was not much I can do. A little disappointing to lost valuable points in that fashion, but I'll be sure to learn from it and now focus on race two and three tomorrow."

Back to the track on Saturday of Easter weekend, Roe slotted into fifth for the start of round four. Looking forward and focused on the top step of the podium, the talented driver drove again into a podium position early on in the race and was on for another second place finish before being hit from behind after just getting on the brakes for turn 10A. Sent into the gravel trap at nearly 265kph, his race was over, and thus the chance to score a fast lap to set the grid for race three.

"Such a disappointment, not only for me, but the team as a whole," added Roe. "We were in position for another podium, two on the weekend, and it was taken from me again. Also, with a drying track and lap times getting quicker and quicker, I was unable to post a lap at real speed, forcing me to start near the back of the grid for race three."

The third wheel-to-wheel session of the weekend, which was round five in the F3 Americas program, saw progression forward from the Irishman. Starting in the ninth position, and going aggressive on his setup, Roe drove to a sixth place finish, even though the handling characteristics of his car drastically were altered, and not to his liking. Though the result was not the best, it was an improvement to his starting position for race three and provides a boost of confidence as the series heads into a two month break before their next event mid-June.

With eight weeks off, James Roe Jr. will have time to regroup and refocus as he looks towards the third event weekend of the F3 Americas Powered by Honda. Taking place at the Pittsburgh International Race Complex in Wampum, Pennsylvania, the Global Racing Group driver will be looking to turn his fortunes around and garner his first podium result or race win of 2019.

James Roe Jr. would like to thank Global Racing Group for their trackside support and race program and his partners including CJJ Motorsports, TopCon Positioning Group, The Vortex Companies, and Bennett Law Office.