Up and Down Weekend for Dickerson at Road Atlanta 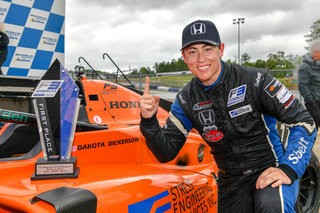 Despite Mother Nature wreaking havoc at Michelin Raceway Road Atlanta during Rounds 3-4-5 of the F3 Americas Championship Powered by Honda this past weekend, Dakota Dickerson overcame mechanical gremlins to come away with a win and third-place finish.

“What a crazy weekend! Ups and downs were the name of the game," said Dickerson. "We had fantastic pace all weekend but were just a bit unlucky. In the first two races of the weekend, we were leading the race before having to make a pitstop for repairs. Nevertheless, the team stayed focused and persevered through it all. They consistently gave me a great car and we absolutely had the pace and positioning to win all 3 races this weekend. It’s in times of adversity when a team’s true colors show and I have to say, I have never been prouder of how hard everyone at Global Racing Group worked this weekend. We won and lost as a team this weekend. I know we are all hungry for wins going into Pittsburgh.”

The qualifying session was cancelled on Friday morning due to severe weather, hence the grid for Round 3 was determined by championship point standings putting Dickerson on pole. Unfortunately, on the parade lap, the Global Racing Group driver sensed a problem with the car and went directly into the pits before the green flag.

“The guys fixed it very quickly and got me out on track without losing a lap,” said Dickerson. “However, this meant I had to start 13th, last on the grid. I was able to fight my way back up through the field and got up to 4th place before a full-course yellow came out. Then, after the re-start, I managed to gain another position before the checkered flag. It was a somewhat disappointing day, knowing the potential we had, but nevertheless, we got a podium and we snagged “Fast Lap” which means pole for tomorrow’s race, all due to the fast actions of the team.”

Saturday morning’s Round 4 showed good promise as Dickerson was leading the pack with nearly a 3-second lead by Lap 5, when three cars went off into the gravel trap bringing out a caution flag. Rain had begun to fall again and added an additional challenge as the cars were on Hankook slick tires. During this full course caution, Dickerson also noticed a vibration developing in the rear of the car. As the race progressed, the vibration continuously worsened and caused a secondary issue to appear. As the track went green, he suddenly lost steering input and moments later, Dickerson ran off track and lost the lead. The San Diego driver was able to re-join the circuit and pit for repairs. Unfortunately, this put him 2 laps behind the field but because of the team’s resilience, still managed to finish in 6th position and gain important points.

“It was such a shame having another issue take us out of the race while in the lead. It felt like we developed a bad vibration during the full course yellow. As the race went on, my steering was getting very erratic until it was completely unpredictable. Fortunately, the team never gave up on me, kept me in the race, and helped me score some great points regardless of the situation. All in all, it’s disappointing but just another reminder as to why Global as a team is so strong. I know we have great pace for the final race, and we will surely be up front. “

In the afternoon’s Round 5, Dakota Dickerson started second on the grid but quickly passed car #16 of Kent Vaccaro, and from then on, he led the final race of the weekend all the way to the checkered flag, claiming the win with a 6-second gap on his teammate Leguizamon who scored 2nd place. And once again, Dickerson ran the “Fastest Lap” of the all-green race to end the weekend on a good note for the Global Racing Group with a 1-2 Finish. Unofficially, Dickerson’s overall weekend results have him sitting 2nd in points, just one point off the Championship lead.

Whether it was the Full Moon or Mother Nature creating havoc with the heavy rains and bad weather, the weekend was tougher than expected for all the F3 Americas teams and drivers. Needless to say, everyone is looking forward to some nice warm weather for the next event at the Pittsburgh International Race Complex on June 21-23. Fans will be able to follow live timing and scoring on F3Americas.com or on the Race Monitor app.