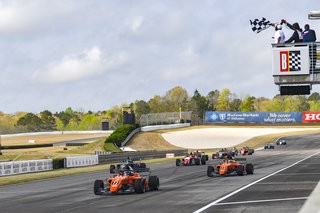 As the prelude to the Honda Indy Grand Prix of Alabama, Round 2 of the F3 Americas Championship was deemed a wet race, forcing the entire field of 13 cars to start on Hankook Tire wet weather tires designed specifically for the Ligier JS F3 cars.  However, as the track dried on the higher elevation points of the 16-turn, 2.38-mile circuit, strategy played into F3 scholarship recipient Dakota Dickerson’s win over his Global Racing Group teammate Benjamin Pedersen. 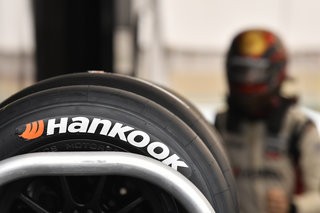 “I must say that Hankook Tires is one of the best wet tires I’ve used. Not only are they fast but they are very reliable, and I maintained speed the entire race,” said reigning F4 U.S. champion Dickerson, who started on pole after setting fast lap time in Saturday’s race. “The rain stopped before we went out, but on our out lap, the track was still extremely slippery so we couldn’t have went out there on slicks. On the fourth lap, the track started to dry, and we ran three quarters of the race in dry conditions on wet weather tires. The Hankook Tires held up the entire race and even had grip left at the end.”

From a second-row start, Kent Vaccaro pushed with Dickerson and Pedersen most of the race, but fell off from contesting up front, trying to hold off fourth-place Jacob Abel. However, the Momentum Motorsports rookie held third, earning his first F3 Americas podium, the highest finish of Vaccaro’s open-wheel career. 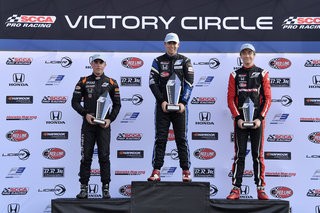 “I’ve had a lot of support behind me to be here and to get this podium in our first event shows the effort that Momentum Motorsports has put into the program,” said Vaccaro. “Jacob Abel was pressuring me from behind and while I was trying to hold him off, Dakota and Benjamin started to pull away. We had a great race and finished on the podium. We can’t wait to Road Atlanta.”

While all the F3 Americas cars were required to take the green on wets, the teams can decide when to call a driver in for a tire change. With variable track conditions, only Parker Locke, Logan Cusson, John Paul Southern Jr. and Dominic Cicero gambled on pitting for slicks to finish out the race. The four drivers waited for a full course yellow to be thrown which would have grouped the cars back up, giving them the opportunity to maneuver through the field. With under five minutes remaining on 30-minute session Locke, Cusson, Southern and Ciciero got their chance after a racing incident between Austin Kaszbua and Baltazar Leguizamon caused the Honda Civic Type R safety car to emerge, pacing the course as safety crews worked on extraction. However, the race clock expired before the quartet of drivers could make their charge. Cusson set fastest lap of the race, with the Canadian rookie and Locke closing out the race in the top-10. 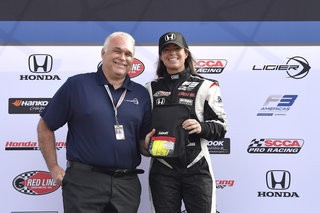 After a rough opening race that ended prematurely, W Series driver Shea Holbrook attacked the field in Round 2, starting from 13th to finish in sixth. The valiant display of poise and patience earned her the first Sabelt Hard Charger Award of the season.

“This has been a great opportunity for me. Being in the W Series I’ll be racing against a lot of competitive females from around the world in the upcoming weeks and to be here in F3 Americas to learn more about the basics like aero washing in open wheel is great. I have a long 10-year career in motorsports, but this is really my first time going wheel to wheel in an open cockpit cars,” said Holbrook. “The Momentum Motorsports team was ready to go to stickered dries, but I think we made a good call to stay on the wets, especially my teammate Kent. For me to start from dead last to and come back to sixth place is a dream come true, and I am grateful. I am looking forward to going to Road Atlanta.

The F3 Americas drivers have a short turn around before traveling to Road Atlanta April 18-20 to support F4 U.S. Championship Powered by Honda and Formula Race Promotions for a full formula race weekend. For full results, team and driver information, visit F3Americas.com.

Official Results for Round 2