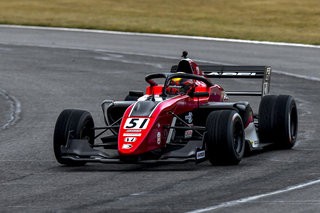 Reigning F3 Americas Championship Powered by Honda champions Abel Motorsports of Louisville, Kentucky, made a late decision to support the Honda Indy Grand Prix of Barber at Barber Motorsports Park, outside Birmingham, Alabama, by fielding one of its team-title-winning Ligier JS3 machines powered by Honda. It was the right call, as rising young ace Jacob Abel muscled his way to a third-place finish in the Saturday season opener, backing that up with a strong fourth in the finale Sunday morning.

“It was a strong weekend for our team,” noted the18-year-old driver. “We were good on Saturday, and I’m proud of the podium result. But we were better Sunday after a tough start, and we were closing on the third-place car when the race ended early. If we’d gone green again, I think we would have been back on the podium easily. Considering we only had one day in the car testing after deciding to support Honda at this event, we had a great weekend.”

Adding to the challenge Sunday, officials determined it to be a wet race after overnight storms dampened the Barber course. “We’re on a new tire in F3 this year, and we had to run on rain tires, a completely new experience,” added Jacob Abel. “Our team did a great job preparing our car and giving me a chance to run really well. I’m pleased.”

Team Principal Bill Abel added, “It was great to come back to the F3 paddock, see lots of old friends in the series, and support Honda. Not sure what the rest of the F3 season looks like for us, but we’ve got a lot of great things coming up in the 2019 season.”

Abel Motorsports has a heavy testing schedule planned over the next several weeks before returning to racing action.