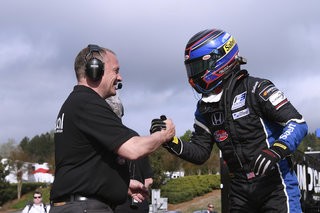 Dakota Dickerson had a great start to the season as he scored his first win and a second-place finish in the F3 Americas Championship Powered by Honda season debut at the stunning Barber Motorsports Park during this weekend’s Honda Indy Grand Prix of Alabama.

The weekend started out with some light rain yielding a damp track for Friday’s practice sessions. However, Dakota Dickerson still managed to get fastest time in both sessions on Friday.

Dickerson had driven the 2.3-mile Barber road course in 2016-17 before and he absolutely loved it.

“It’s always great being back here. This track has elevation and high-end speed corners. It’s got a little bit of everything which makes it fun to drive” said the young driver.

Saturday morning qualifying did not offer much green time as a red flag was brought out when one of Dickerson’s teammates, James Roe Jr. went into the tire wall at Turn 13. Roe was uninjured and the Global Racing Group team worked diligently to get the car ready in time for the race, scheduled just a few hours later.

“Qualifying was a bit difficult”, said Dickerson. “We had a 30-minute session but it was littered with red flags. The original Team strategy was to wait a few minutes and let the track warm up, since we were the first ones on track in the morning. Turns out we only had about a three-lap run and we spent it warming up the tires. And, by the time I got to my last lap, there was traffic, and another red flag ended the session. I know we’ll do well in the race, but it’s just a little bit frustrating starting from third place when we had the pace to put it on pole.”

Saturday’s race started at 11:45 AM under cloudy skies and 76 humid degrees. As soon as the green flag flew, Dickerson wasted no time passing the car in front of him, moving up to second place right behind his teammate Benjamin Pedersen. Two laps later, a full-course caution was bought out with car No. 67 (Shea Holbrook) going off track. On the re-start, the San Diego native kept improving his times but was not able to clinch first place. However, he did get the Fastest Lap of the Race, which secured him pole position for Sunday’s race.

“I had a good start” said Dickerson. “I tried to attack early on in the race. Barber is a really fun track but definitely difficult to pass on. It was a learning experience for me in the new higher-aero Ligier JS F3. I was trying to manage the loss of aero going thru the corners, while also put pressure on Ben (Pedersen), but just before the white flag, I made a slight mistake trying to push a little too hard getting to Ben, and sent if off track. Ultimately, I was pretty lucky to maintain second place and collect some good points. I’m starting on pole tomorrow, so hopefully, the roles will be reversed.”

With heavy rains coming down the night before, Sunday’s race was declared “wet” by the F3 Americas Officials, as the track was still too damp. Rooster tails were very visible behind the cars during the first part of the race, and the drivers were well aware that managing their Hankook tires was important, as the track would start drying out with every lap. Dickerson led his teammate throughout the race trying to manage the gap while conserving his tires. With just a few laps to go, a yellow flag came out and Dickerson’s No. 72 JS F3 Ligier crossed the finish line under yellow, just ahead of his teammate Benjamin Pedersen.

“It was a fantastic race for us” said Dickerson. “We started on the pole position and I knew I had to get a good start to keep Ben behind me. I got a good launch when the lights went out and from there I was trying to manage my tire life and gap to Ben. As the race progressed he started to put more pressure on me but the yellow flag came out ending the race. Although it would have been great to finish under green flag conditions, it still feels awesome to have led every lap and to also finish the weekend off with another 1-2 finish for Global Racing Group. I am really looking forward to the next race weekend at Road Atlanta.”

Global Racing Group Team Principal, Christian Pedersen commented: “We couldn’t have wished for a better first round of the 2019 F3 Americas Championship! With P1 and P2 in both races, Global Racing Group established a solid points-lead. And, we also had our drivers take three of the top four spots in the drivers’ championship. Our drivers showed how strong collaboration and teamwork benefits all and Dakota now sits P1 in the championship sharing that spot with his teammate Benjamin Pedersen.”

Kurt Vandervort and Vastan Tchokoev of Stress Engineering Services, one of Dickerson’s sponsors, totally enjoyed spending time at the Barber race this past weekend. With both of them being engineers, they fit right in, and were grateful for the meetings Dickerson arranged for them, over the weekend.

And this week, the San Diego driver is scheduled to attend the RRDC dinner during the Acura Grand Prix of Long Beach weekend with Doug Mockett (Doug Mockett & Co.) who recently came on board as one of his sponsors. Mockett’s last protégé was Colton Herta, winner of the NTT IndyCar race at COTA.

Dakota Dickerson and the Global Racing Group will travel to Road Atlanta shortly for the next F3Americas race weekend on April 18-20.

Dakota Dickerson is a third-generation racer from San Diego, CA. The 22-year old has been racing since he was 6 years old and is currently racing with Global Racing Group in the F3 Americas Championship powered by Honda. In his first two years of racing cars, he won a Driver Development scholarship from Bryan Herta Autosport (2-time Indianapolis 500 winning team), a Karts to Cars scholarship from Skip Barber Racing School, was chosen to be one of two drivers to represent the United States overseas via the Team USA Scholarship and was the 2016 USF2000 Mazda Scholarship Driver. Most recently, he won the 2018 F4 US Championship. With this success, he hopes to continue on to the NTT INDYCAR Series.