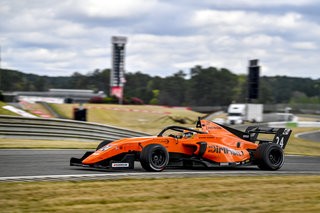 In a last lap attempt, Global Racing Group driver Benjamin Pedersen claimed the first pole of the season by less than four tenths of a second over Velocity Racing Development rookie Mathias Soler-Obel, who lead qualifying for most of the opening session, at Barber Motorsports Park early Saturday morning.

"All of our efforts went into getting pole to put ourselves in a good position to win the opening race," said Pedersen. "The session was interesting and we knew that we had to go out there and get the fastest lap. We were able to do that."

Global Racing Group rookie and reigning F4 U.S. champion Dakota Dickerson ran the quickest in both official practice sessions on Friday, but was beat out by Pedersen and Soler-Obel by less than half a second in qualifying. He will lead the second row in the season debut.

The 13-car F3 Americas field take the green at 11:45 am CT for a 30-minute race around the scenic  16-turn, 2.38-mile circuit. Follow live timing and scoring here or on the Race Monitor App.