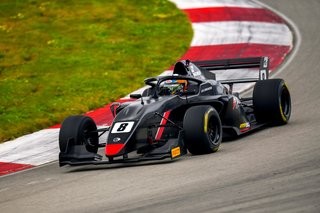 Abel Motorsports took delivery of the new Ligier machine powered by a turbocharged-Honda K20 four-cylinder engine Monday at Pitt Race, where the new F3 Americas regional championship held its first team test days in advance of this weekend’s first-ever F3 Americas races, and busy getting fitted into the new machine was young Kirkwood, who has already claimed another major open-wheel racing championship in 2018.   “It’s extremely exciting.   These cars look amazing.  I’m really looking forward to having the chance to drive this car for Abel Motorsports in its debut.    I’ve known the Abels for awhile now. They have a really good team and I’m looking forward to working with them.”

The F3 Americas series is affiliated with the international FIA driver development ladder and represents the next step up from the F4 U.S Championship.   “To have the F3 car with 100 more horsepower than what I’ve been driving is a big step. Any racer wants more power in their car, and that’s what I’ll have here!” noted Kirkwood.

Team principal Bill Abel is also excited about growing the squad’s roster.   “We plan to continue to grow Abel Motorsports’ footprint in major open-wheel racing.   Having the chance to be in F3Americas at the start, and to have a driver with the resume’ of Kyle Kirkwood join us, is a huge step for our group.  We couldn’t be more pleased.”

Team Manager Mark Gibbs is equally thrilled.   “We’re ready to get going with this new race car, and see how the weekend turns out.   Kyle’s been very impressive already.  He’s very hands-on.  We can’t wait to see how he does with a bigger, slightly heavier car with more wing, more tire, and much more power.”

F3 Americas is scheduled to run three 30-minute races on each of six weekends in the second half of 2018, beginning at Pitt Race this coming Saturday and Sunday.