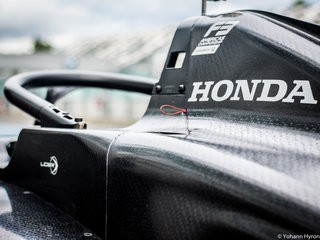 The first official entry for the world debut of the new F3 Americas Powered by Honda at Pittsburgh International Race Complex Aug. 3-5 for Keystone Speedfest was confirmed today with John Paul Southern Jr. of Westlake, Ohio. The Formula 4 United States Championship Powered by Honda graduate will pilot the No. 61 Pitt Race Ligier JS F3 car as a single-entry for Southern Motorsports, bringing former Formula 1 driver Tommy Byrne along for consulting support. Half a dozen cars are slated for the first event with growth anticipated as the season develops.

“Four more cars are scheduled for delivery this week, and as deliveries are confirmed, we will see the grid grow.,” said SCCA Pro Racing Vice President Steve Oseth. “Our goal by COTA is at least a 16-car field.”

While Southern Motorsports is new to F3, the team is a powerhouse of experience comprised of IndyCar veteran mechanic Sam Goldsmith, veteran engineer John Walko, who has been the force behind numerous race wins and championships, including both the 2005 Star Mazda Series and 2004 Formula Ford Zetec Series championships, and Byrne.

“The wait to get the F3 on the track and race is almost over and I’m ready for the challenge,” said Southern. “With years of relationships with the experienced professionals on our team, of course our goal is to get to the front pack and compete for wins. I had a lot of off-season success with engineer John Walko in a similarly powered race car, and I’m eager to bring him onboard for F3. Our focus now is getting the new car competitive. We also want to acknowledge the demanding hard work that has been put into the development and production of this new car by everyone at Onroak Automotive, Honda Performance Development and Pirelli.”

Tickets for the Keystone Speedfest, a mixed sports car and open-wheel weekend with F4 U.S., the TransAm Series and Formula Race Promotions, are still available here. The full entry list for F3 Americas will be released on Aug. 1.