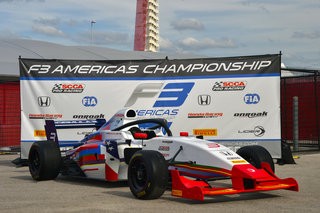 The excitement for the 2018 season continues to grow as K-Hill Motorsports welcomes back Peter “Importante” Portante of Plainville, New Jersey, for his third season with the Pennsylvania-based team.

After winning the 2017 Formula Atlantic Championship with K-Hill Motorsports, Portante realigned himself with the team to focus on capturing another championship. In 2018, Portante will compete under K-Hill in the newest SCCA Pro series, Formula 3 Americas Championship Powered by Honda.

“I am more than excited to finally announce my signing with K-Hill Motorsports for the 2018 Formula 3 Americas Championship,” Portante said. “It will be my third year under the K-Hill tent and I wouldn’t be here if I didn’t have the utmost respect and confidence in all the boys here. I hope to carry on our winning pedigree to our campaign in F3 Americas this season.”

K-Hill Motorsports and Portante have a successful past together. The pair were the first driver and team combo to win races in the Formula Race Promotion F1600, F2000 and Formula Atlantic championships.

“We are extremely excited to have Peter join our team for a third year,” K-Hill Motorsports Team Principal Kris Kaiser said. “He has shown us his skills in the F1600 series and we know he will thrive in the F3 series in the 2018 season. He continues to be an asset to our team and know he will be someone to watch this season.”