Dakota Dickerson: Off and Running 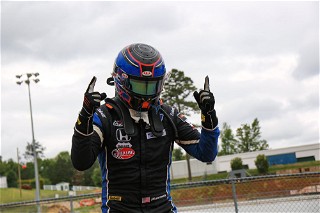 We're only a couple of weeks into a new decade but the racing season has already begun for reigning F3 Americas Championship Powered by Honda title holder Dakota Dickerson. As part of his F3 Americas championship package, Dakota received a full ride in the 2020 IMSA Prototype Challenge with MLT Motorsports from Ligier Automotive. In just his first event, Dakota finished on the podium at Daytona.

Dakota Dickerson: Off and Running

We’re only in the third week of 2020 and it feels like so much has already happened! One of my New Year’s resolutions is to try and pick up my blog activity so I can keep all of you in the loop and also have a record of all the fun we will be having in the 2020 season. This year, we will be competing in the IMSA Prototype Challenge with MLT Motorsports. This presents a whole new variety of challenges, and equally, a slew of new opportunities. 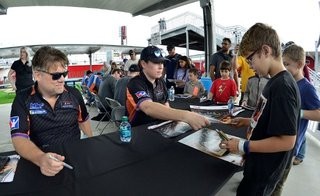 To give some context, IMSA Prototype Challenge is a six-event endurance racing championship with two drivers sharing a car to race for either one hour 45 minutes or three hours. The championship requires that an FIA rated bronze driver (for example, my teammate Dean Baker) pairs up with an FIA rated silver driver (myself). We believe we’ve created a strong lineup for the year. Dean is an experienced prototype racer and competed against us in the 2019 season. Unlike the junior formula car championships that we had been competing in, Prototype Challenge allows different manufacturers to compete in the same class. We all have the same tires, engine and transmission but we can choose between chassis manufacturers. We will be competing in the Ligier JS P3 which is a very nice continuation of our relationship and success with Ligier in the F4 U.S. Championship (Ligier JS F4) and F3 Americas Championship (Ligier JS F3). The other popular chassis is the Norma M30 which typically yields great straight-line speed but lacks in aerodynamic grip relative to the Ligier. It creates great racing and a fun, competitive dynamic in the paddock between the two manufacturers.

MLT Motorsports was only formed less than one year ago, having made its debut at Sebring, so this year represented its first-ever visit to Daytona International Speedway the first week of January for the opening race of the new season. There was a lot of work involved but we made great progress during the three practice sessions, and both myself and Dean felt very comfortable in the car. The only real item up in the air was our aero settings. We knew we couldn’t compete with the Normas in a straight line, but with the impending rainy weather on race day, some extra aero seemed like our best bet to challenge for a win. Dean spent the final practice session prepping for qualifying and we all felt strong heading into Saturday.

IMSA requires all bronze-rated drivers to qualify and start the race which means Dean will have the honors of qualifying the car throughout the year. During the 15-minute session, Dean was clearly one of the guys to beat. He was consistently in the top three-five positions but as the time wound down in the session, he experienced a loss of power on the banking and had to pit. We unfortunately ran him just short of fuel which meant the rest of the pack got an extra two laps on us. Nevertheless, we would be starting ninth which is well within striking distance for the three-hour race. 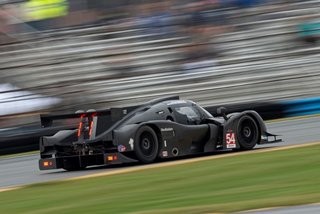 It would be a quick turn around time to the race, but then mother nature threw everyone a curve ball. Around 30 minutes before the start, the rain really started to come down. Teams had to switch over to Michelin wet tires and the drivers had to prepare for a whole new beast of a race. The cars exited pit lane behind the safety car and took a couple of reconnaissance laps before officially taking the green. It was still pouring which made the racing really tricky, but Dean handled it with true master class. There were a couple of great benefits for us when the rain came as well. The first was raw pace. Dean was one of the fastest drivers on track and carved his way to second place by the time he handed the car over at the one-hour mark. The second was the fact that we were able to make it to the one-hour mark on a tank of fuel. For 2020, IMSA mandated all teams to go from a 100-liter fuel cell down to an 85-liter capacity which meant teams were only going to get maybe 50-51 minutes of drive time on a full tank. The problem with this means teams would have to make a third stop at the end of the race for a “splash and go” but in the IMSA Prototype Challenge it’s more of a “splash and wait” – whenever teams fuel the car, it is mandated that the car must be in pit lane for a minimum of 115 seconds (a lap around Daytona takes 105 seconds) which would put whoever makes that third stop a lap down. That’s rather a long-winded description as to why the rain was great for us, but yeah, it allowed us to stick with a two-stop strategy!

When Dean came into the pits, the team performed a full-service stop and I hopped in the car. I went out with new Michelin rain tires and found myself in seventh (due to the pit cycle). Right away, I got to work and started to move through some lap traffic and made up a few positions. As the rain stopped and the track dried out you could definitely feel the tires degrading. In order to stay on track for our two-stop strategy, we needed to make it to at least two hours and 10 minutes into the race, which also meant I needed to conserve the right-rear tire. In the last minutes of my first stint I was able to move into the lead. A few minutes after that a full-course yellow came out and bunched up the field. This also provided a great opportunity for us to switch on to slick tires and make a run to the checkered flag. After the pit cycles we would line up in third. We moved our way back into the lead, and with the only two cars that were quicker than us over a minute behind, we felt very comfortable heading into the final 30 minutes of the race. But sure enough, another yellow flag came out and bunched up the field again. I tried my hardest to get a good jump on the restart but the No. 47 and No. 64 cars had outright pace on us that couldn’t be stopped. Nevertheless, a third-place finish in the season opener is a really respectable result and valuable points for the championship!

Our next event will be at Sebring International Raceway during the “Super Sebring” event in March. We will be working really hard as a team to continue improving, and I’m fully confident we will be able to challenge for another win there as well. None of this would be possible without the support and guidance of Dr. Mike Thompson, MLT Motorsports, Ligier Automotive NA and all of our personal partners. Likewise, I really appreciate you all for following my progress and I hope to have a “winning” blog for all of you come March. In the meantime, I’ll be active on social media via Instagram/Twitter (@dickersonracing) and Facebook/YouTube (Dakota Dickerson Racing)!